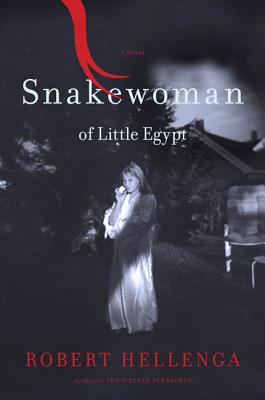 On the morning of her release from prison, Sunny, who grew up in a snakehandling church in the Little Egypt region of Southern Illinois, rents a garage apartment from Jackson. She's been serving a five-year sentence for shooting, but not killing, her husband, the pastor of the Church of the Burning Bush with Signs Following, after he forced her at gunpoint to put her arm in a box of rattlesnakes.

Sunny and Jackson become lovers, but they're pulled in different directions. Sunny, drawn to science and eager to put her snake handling past behind her, enrolls at the university. Jackson, however, takes a professional interest in the religious ecstasy exhibited by the snakehandlers. Push comes to shove in a novel packed with wit, substance, and emotional depth. Snakewoman of Little Egypt delivers Robert Hellenga at the top of his form.

Robert Hellenga was educated at the University of Michigan and Princeton University. He is a professor at Knox College in Galesburg, Illinois, and the author of the novels The Sixteen Pleasures, The Fall of a Sparrow, Blues Lessons, Philosophy Made Simple, and The Italian Lover.

Praise For Snakewoman of Little Egypt: A Novel…

“Dead solid perfect. The truest and most moving portrait of the romance of research and the lyricism of learning that you will ever find. Plus: a good solid story, right down the center. I loved this book.” —Mary Doria Russell

“Hellenga is fearlessly inventive. Could anybody else combine snake handling, the Ituri pygmies of the Congo, life in a women's prison, learning to play timpani, a murder trial, and a poignant love affair in three-hundred-odd fast-paced, highly readable pages?” —Maxine Kumin

“Three reasons to love Hellenga: He's a fine storyteller; he gives us new eyes; he restores our sense of wonder. Attention must be paid.” —Kirkus Reviews

“Yes, it is a melancholy story, but it is also immensely satisfying and even uplifting in that unique way that only deeply felt life can provide.” —Booklist (starred review)

“Though slow to start, the serpentine story solidifies into a captivating and original take on the strange ways of redemption.” —Publishers Weekly

Who are the “pleasure seekers” of the novel’s title? Which characters seek pleasure first and foremost, and which seek other forms of fulfillment—romance, spirituality, duty, wealth? How do these characters challenge the Jain religion’s prohibitions against pleasure?

The Pleasure Seekers spans more than thirty years and four generations. How does each section of the novel capture its era? What milestones and trends of British and Indian history are re-created in the novel? Which period details come to life?

What are Babo’s first impressions of London? What hardships does he face as he arrives in this new city? How does he negotiate new attitudes toward family, work, food, and women? How does Babo’s journey serve as “the turning point for his entire family” (259), the milestone by which the Patels measure their family history?

Trishala refers to Babo as “this first-born, this child of desire” (34). Why does Trishala blame herself for Babo’s romantic choices? How does Prem Kumar, in turn, express guilt for his son’s behavior? How does Babo’s marriage test their spiritual faith?

Compare the relationships Babo and Siân have with their parents. How are Babo’s and Siân’s family disputes similar and how are they different?

Siân lives her life “plagued by separations” (113)—leaving her parents, her homeland, and her customs, again and again. How does Siân cope with her permanent exile? What helps her adjust to a new life in India, and what will she always miss of her tiny Welsh hometown?

Meeting her great-granddaughters for the first time, Ba predicts, “Mayuri is going to sink her roots deep. She will know what she is and what she wants, always. But this one, this Beena, she will change from earth to water to fire, again and again” (117–18). How do Ba’s predictions eventually turn out? In the end, which sister seems happier in her element: earthy Mayuri or mercurial Bean?

Discuss Babo and Siân’s friendships with the other mixed couples of Madras. What comforts do these friendships provide? Do these couples and their children seem happy with their lives in India? Why or why not?

Two pieces of tragic news strike Sylvan Lodge at the same time: Indira Gandhi’s assassination and Trishala’s breast cancer. How does the Patel family handle this dual challenge? At which other moments in the novel do national history and family history intersect?

The Pleasure Seekers chronicles as many deaths as births, balancing pleasure and grief. How do the novel’s characters cope with loss? Which characters have the most difficulty recovering from the deaths of loved ones?

Consider Bean’s decision to move to London. What does she seek there, and what does she leave behind? How does her quest compare to her father’s journey, so many years before?

Discuss the high and low points of the long marriage between Babo and Siân. What challenges their happiness as a couple, and how do they recover from their marital difficulties?

Trapped in the Republic Day earthquake in Anjar, Bean experiences a “moment of blinding clarity. Forty-five seconds of it. Bean hadn’t thought of Javier. She had thought of her baby, of Ba. Of what Babo, Siân and Mayuri would do without her in the world” (310). Why do thoughts of Javier slip away in this moment of near-death experience for Bean? What does she learn about the bonds of family and the bonds of love?

Consider the sights, sounds, and smells of Ganga Bazaar, Ba’s home in Anjar. What makes Ba’s home and community so special? Why does the novel close in Ganga Bazaar, with Ba having the last word?

What kind of mother might Bean become? What might the future hold for the unborn child, who has already survived an earthquake and her mother’s heartbreak?

Tishani Doshi is a poet and a dancer as well as a novelist. What elements of poetry and music can be found in The Pleasure Seekers? Point out some examples of particularly poetic language in the novel.