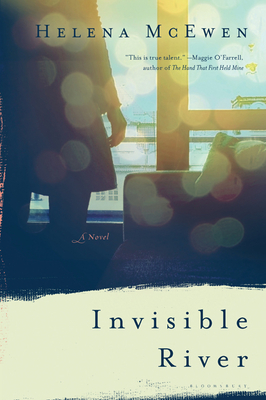 When Evie and her father say good-bye at the train station, they are both on their own for the first time since her mother's death. But Evie is not lonely for long. At art school in London, she is quickly caught up in colors and critiques, gallery visits and sketching expeditions. She finds fiercely loyal friends-Rob, pragmatic and pregnant; Bianca, dramatic and Italian; and Cecile, the sidelined ballerina-and stumbles tentatively toward a relationship with Zeb, a second-year sculptor with hair blue-black like a crow.

But when her father arrives in the city, sour with alcohol and slumped on the doorstep of her new home, Evie must determine what she owes her past, and how it will shape the life, and the art, she's trying to create.

Gently and genuinely observed, written with painterly beauty, Invisible River is an unforgettable novel of the mysteries, desolations, and heart-soaring hopes of entering adulthood.


Praise For Invisible River: A Novel…

“[An] ethereal novel... McEwen makes good use of her own art training, portraying artists struggling to express their ideas, using vividly described colors that sometimes glow and glitter, in fiction that proves a visual feast.” —Booklist

“[A] beautiful, tender novel... It's not surprising that Helena McEwen, who studied art in London, has a great eye for detail. I've seldom read descriptions of London as a beautiful city -- maybe Dickens put paid to that -- but in McEwen's hands it becomes wondrously so... It's a joy, in so cyncical a time, to find a book that celebrates unapologetic happiness.” —Bookpage

“Told in a quiet voice full of artistry and color, this will appeal to fans of literary coming-of-age novels.” —Library Journal

“Helena McEwen's coming-of-age tale is defiantly old-fashioned... Yet McEwen writes wich such conversational ease and displays such an artist's eye, that the novel rarely fails to charm. Who knew innocence could be so engaging?” —Financial Times

“Helena McEwen is an artist who brings a painter's eye to her fiction... In its unflinching juxtaposition of shadows and light, pain and happiness, Invisible River is a love story on several levels... Invisible River is about looking, seeing and understanding... an evocative reminder of how it feels to be young.” —Guardian

Helena McEwen grew up in Scotland and studied painting at Chelsea and Camberwell schools of art in London. She is the author of two highly acclaimed previous novels, The Big House and Ghost Girl. Invisible River marks her U.S. debut. McEwen lives in Scotland.

Invisible River opens with Evie boarding a train to London and leaving her father behind. Why does she still “feel the pull of my father left alone,” even as the train speeds away from Cornwall? How does Evie’s arrival in London help break that pull, and how does Cornwall keep a hold on her feelings and imagination?

As Evie sees her school for the first time, she thinks, “I only had to cross the road to walk into the tall glass cube that would be my art school for the next three years.” (4) How does the architecture of the art school—its glass, mezzanines, and various studios—influence Evie’s work and her friendships?

What are Evie’s first impressions of her new friends at art school: Bianca, Rob, Cecile, and Zeb? How does each of these friendships begin, and how does each evolve as Evie’s family problems catch up with her in London?

As Evie studies Rob’s primitive paintings, she realizes that “she knows how to make an unseen world into pictures and I want to know too.” (27) What does Evie admire about Rob’s art? How does Rob’s pregnancy influence her creativity? How does Rob help Evie discover her own methods and subjects?

Although Evie’s father is absent throughout most of the novel, he still has a strong presence in Invisible River. What kind of father does he seem to be? What faults and strengths does he possess? What does Evie learn from him?

Analyze Evie and Zeb’s relationship through the small gifts they exchange. What objects does Zeb leave for Evie, and how does she reciprocate? What do these gifts say about each of these characters and the feelings between them?

When Evie finds her father on her doorstep in London, she feels “a horrible combination of disgust and tenderness and anger and panic.” (98) How does Evie sort through these mixed emotions? Is Evie able to forgive herself for kicking her father out? Why or why not?

Consider some of the London locations that inspire Evie, including the London Stone, the Museum of London, Hyde Park, the city’s hidden gardens, and the Thames River. What does each of these London sites contribute to Evie’s art? How does the city look and feel to Evie, and how does she translate its energy into paintings?

How does Evie finally remember her mother’s death and funeral? What images and feelings can Evie recall from when she was five? How does Magda help Evie through the mourning process when she loses each of her parents?

Consider Evie’s trip to Cornwall for her father’s funeral. What is her state of mind during this trip? How does she emerge from this difficult period, and how does her character change afterward?

When Evie, Rob, Bianca, and Cecile paint a picture together in the sculpture yard, they end up with “the wildest painting of London you’ve ever seen.” (246) Analyze the multitude of images and techniques that the girls contribute to this group painting. How do their styles and subjects work together? What comes out of their artistic collaboration?

Trace Evie’s artistic growth throughout Invisible River. What colors inspire her when she first arrives in London? How does her father’s arrival and disappearance affect her artwork? How does her mourning process color her canvases? Why does Evie feel that “now I’ve found my own way of working” (271) when she discovers the process of monoprinting?

Invisible River ends with Evie and Zeb dancing at the degree show party, “and circles of coloured light are exploding behind my eyes, because the world is being born.” (301) What does this newborn world look and feel like to Evie? What new possibilities are coming to light?