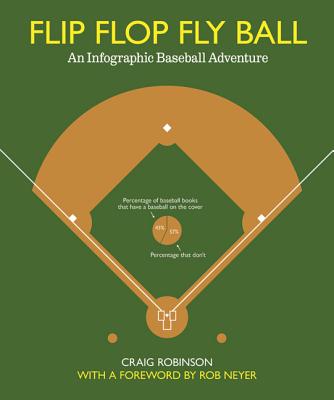 How many miles does a baseball team travel in one season?
How tall would A-Rod's annual salary be in pennies?
What does Nolan Ryan have to do with the Supremes and Mariah Carey?
You might never have asked yourself any of these questions, but Craig Robinson's Flip Flop Fly Ball will make you glad to know the answers.
Baseball, almost from the first moment Robinson saw it, was more than a sport. It was history, a nearly infinite ocean of information that begged to be organized. He realized that understanding the game, which he fell in love with as an adult, would never be possible just through watching games and reading articles. He turned his obsession into a dizzyingly entertaining collection of graphics that turned into an Internet sensation.
Out of Robinson's Web site, www.flipflopflyball.com, grew this book, full of all-new, never-before-seen graphics. Flip Flop Fly Ball dives into the game's history, its rivalries and absurdities, its cities and ballparks, and brings them to life through 120 full-color graphics. Statistics-the sport's lingua franca-have never been more fun.
(By the way, the answers: about 26,000 miles, at least if the team in question is the 2008 Kansas City Royals; 3,178 miles; they were the artists atop the Billboard Hot 100 when Ryan first and last appeared in MLB games.)
Craig Robinson is, among other things, an Englishman and a New York Yankees fan with a soft spot for the Colorado Rockies and a man-crush on Ichiro. Last season he played outfield for the Prenzlauer Berg Piranhas in the Berlin Mixed Softball League (.452/.548/.575). His previous books include Atlas, Schmatlas: A Superior Atlas of the World and Fun Fun Fun.

“The greatest baseball infographics ever.” —Slate

“The combination of [Robinson's] precisely created charts and the offbeat things they chart reflects a brain firmly, winningly divided between the game's childlike, imaginative pull and the over-thought technocracy of its sabermetrics era.” —The Second Pass

“Casual fans will definitely appreciate the trivia and visual aesthetics of Robinson's infographics. It's also a book that packs a ton of information for real fans--I find myself looking at the graphics over and over because I know I will find more value each time I pick up the book up.” —Kevin Lai, Hardball Times

“Do yourself a favor and buy this book. It provides insight into the game of baseball you won't find anywhere else. You'll also have the coolest book on your coffee table for when you throw one of those dinner parties you keep having.” —Mop Up Duty

Craig Robinson is, among other things, an Englishman and a New York Yankees fan with a soft spot for the Colorado Rockies and a man-crush on Ichiro. Last season he played outfield for the Prenzlauer Berg Piranhas in the Berlin Mixed Softball League (AVG .452 SLG .548 OBP .575). His previous book, Atlas, Schmatlas: A Superior Atlas of the World, was deemed "highly inappropriate" by the director of the Forsyth County Public Library. His Web site is www.flipflopflyball.com.