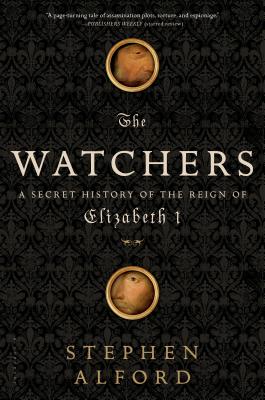 A Secret History of the Reign of Elizabeth I

In a Europe aflame with wars of religion and dynastic conflicts, Elizabeth I came to the throne of a realm encircled by menace. To the great Catholic powers of France and Spain, England was a heretic pariah state, a canker to be cut away for the health of the greater body of Christendom. Elizabeth's government, defending God's true Church of England and their great queen, could stop at nothing to defend itself. Headed by the brilliant, enigmatic, and widely feared Sir Francis Walsingham, the Elizabethan state deployed every dark art: spies, double agents, cryptography, and torture.

Delving deeply into sixteenth-century archives, Stephen Alford offers a groundbreaking, chillingly vivid depiction of Elizabethan espionage, literally recovering it from the shadows. In his company we follow Her Majesty's agents through the streets of London and Rome, and into the dank cells of the Tower. We see the world as they saw it—ever unsure who could be trusted or when the fatal knock on the door might come. The Watchers is a riveting exploration of loyalty, faith, betrayal, and deception with the highest possible stakes, in a world poised between the Middle Ages and modernity.


Praise For The Watchers: A Secret History of the Reign of Elizabeth I…

“The secret agents who labored to prove Mary's guilt and bring about her execution are the stars of this meticulous chronicle ... Elizabeth's spies routinely used the rack for interrogations; torture was then, as now, justified as a means of protecting 'the security of the state.'” —New Yorker

“Alford populates this engaging study of Elizabethan espionage with a cast of colorful characters and exposes the dark underbelly of a period that is often better known for Shakespeare and the triumph against the Spanish Armada. Secret correspondence, infiltration into the ranks of exile English Catholics in Rome and the betrayal of double agents are some of the thrilling elements that comprise this little-known tale.” —Ilana Teitelbaum, Shelf Awareness

“It provides a genuine--and compelling--reappraisal of one of the most studied periods in English history: the reign of Elizabeth I. In exploring the world (or underworld) of Elizabethan espionage, Alford takes us on a darker, more disturbing and arguably more fascinating journey through the Elizabethan era than any other historian of the period …[An] engaging and perfectly pitched narrative. … Alford weaves together the bewilderingly complex threads of plots and counterplots so skillfully that as a reader you are never left floundering.” —BBC History Magazine (named a Pick of the Month)

Stephen Alford is a fellow in history at King's College, Cambridge, and the author of the acclaimed Burghley: William Cecil at the Court of Elizabeth I, The Early Elizabethan Polity: William Cecil and the British Succession Crisis, 1558-1569, and Kingship and Politics in the Reign of Edward VI. He writes for the Times Literary Supplement and other periodicals.