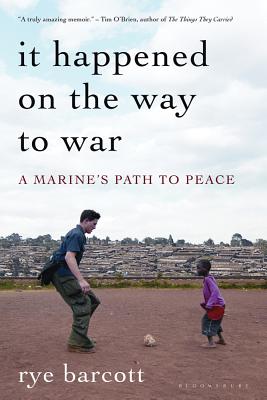 It Happened On the Way to War

In 2000, Rye Barcott was a student on an ROTC scholarship when he first visited the Kibera slum of Nairobi, Kenya. He wanted to understand the ethnic violence he expected to face in uniform. Once there, Barcott befriended a widowed nurse and a community organizer, and together they built Carolina for Kibera (CFK), an NGO that breaks cycles of violence and develops young leaders in one of Africa's largest slums. Barcott continued his work with CFK while leading Marines in Iraq, Bosnia, and the Horn of Africa. He waged peace while fighting war, and struggled to compartmentalize the experiences and resist darker forces. It Happened on the Way to War is a true story about the powerful melding of military and humanitarian service. It's a story of what America's role in the world could be.

Praise for It Happened on the Way to War:

"Riveting. A beautifully written memoir that reads like a novel and reveals fundamental truths about good, evil, and our common humanity."-Ishmael Beah, author of A Long Way Gone

"A tremendous story of the power of friendship, love, and the transforming grace of God." -Archbishop Emeritus Desmond Tutu, Novel Peace Prize laureate

“It Happened on the Way to War is part memoir of a life in Rhode Island, North Carolina (Chapel Hill and Camp Lejeune), Africa and Iraq, part acknowledgement of an "incipient bloodlust," part love story, part war and part peace – and wholly engaging and amazing and inspiring.” —Military Times

“Moving, sad, humorous, sometimes dramatic, and beautifully written … [It Happened on the Way to War] is a story about what is possible, and will be inspirational to new generations of leaders and public servants.” —The Officer

Rye Barcott founded Carolina for Kibera (CFK) with Salim Mohamed and Tabitha Atieno Festo while he was an undergraduate at UNC Chapel Hill. After graduation, he served as a Marine for five years on active duty. In 2006 ABC World News named then Captain Barcott a Person of the Year for his dual service to Kibera and the Marine Corps. As a Reynolds Social Entrepreneurship Fellow, he earned master's degrees in business and public administration from Harvard. He is currently a member of the World Learning Board of Trustees and a TED Fellow living in Charlotte, North Carolina.