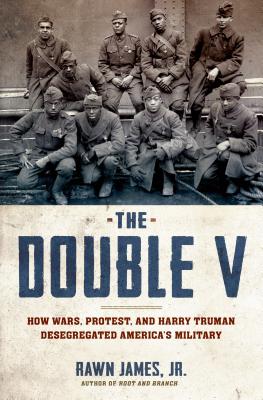 Executive Order 9981, issued by President Harry Truman on July 26, 1948, desegregated all branches of the United States military by decree. Truman's historic order is often portrayed as a heroic and unexpected move--but in reality, it was the culmination of more than 150 years of legal, political, and moral struggle.

Beginning with the Revolutionary War, African Americans had used military service to do their patriotic duty and to advance the cause of equal rights. The fight for a desegregated military was truly a long war--decades of protest and labor highlighted by bravery on the fields of France, in the skies over Germany, and in the face of deep-seated racism on military bases at home. Today, the military is one of the most truly diverse institutions in America.

In The Double V, Rawn James, Jr.expertly reveals how the campaign for equality in the military gave impetus to the fight for equality in civilian society. Taking the reader from Crispus Attucks to President Barack Obama, The Double V illuminates the African American military tradition and its vital place in American history.

“Smart and insightful...an immensely readable book with plenty of modern relevance as today's American military considers who should be able to fight and how… James [is ]an excellent storyteller.” —Christian Science Monitor

“As long as inequality persists, this tale of persistence, sacrifice, and triumph will continue to inspire.” —Publishers Weekly

“[James] skillfully examines how the Caucasian-dominated military, with a few notable exceptions in the top ranks, treated African-American members as second-class citizens… An inspiring story spanning parts of five centuries as African-Americans pushed back against the powers that be to achieve more-or-less equal treatment inside the military.” —Kirkus

A graduate of Yale University and Duke University School of Law, Rawn James, Jr., has practiced law for a decade in Washington, D.C., where he lives with his wife and their children.
Loading...
or
Not Currently Available for Direct Purchase