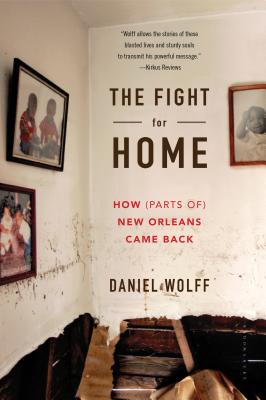 The Fight for Home

How (Parts of) New Orleans Came Back

After the devastation of Hurricane Katrina, New Orleans became ground zero for the reinvention of the American city, with urban planners, movie stars, anarchists, and politicians all advancing their competing visions of recovery. In this wash of reform, residents and volunteers from across the country struggled to build the foundations of a new New Orleans.

For over five years, author Daniel Wolff has documented an amazing cross section of the city in upheaval: a born-again preacher with a ministry of ex-addicts, a former Black Panther organizing for a new cause, a single mother, "broke as a joke" in a FEMA trailer. The Fight for Home chronicles their battle to survive not just the floods, but the corruption that continues and the base-level emergency of poverty and neglect.

From ruin to limbo to triumphant return, Wolff offers an intimate look at the lives of everyday American heroes. A s these lives play out against the ruined local landscape and an emerging national recession, The Fight for Home becomes a story of resilience and hope.

Daniel Wolff is the author of How Lincoln Learned to Read, a Chicago Tribune Editor's Choice pick; 4th of July, Asbury Park, a New York Times Book Review Editor's Choice pick; You Send Me: The Life and Times of Sam Cooke, a national bestseller; and two volumes of poetry, among other books. His writing has appeared in publications ranging from Vogue to Wooden Boat to Education Weekly. He is the co-producer, with Jonathan Demme, of several documentary film projects on New Orleans.
Loading...
or
Not Currently Available for Direct Purchase