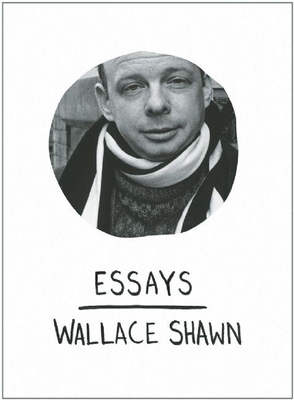 "Full of what you might call conversation starters: tricky propositions about morality... politics, privilege, runaway nationalist fantasies, collective guilt, and art as a force for change (or not)...It's a treat to hear him speak his curious mind."--O Magazine

In these beautiful essays, Wallace Shawn takes us on a revelatory journey in which the personal and political become one.

Whether writing about the genesis of his plays, such as Aunt Dan and Lemon; discussing how the privileged world of arts and letters takes for granted the work of the "unobtrusives," the people who serve our food and deliver our mail; or describing his upbringing in the sheltered world of Manhattan's cultural elite, Shawn reveals a unique ability to step back from the appearance of things to explore their deeper social meanings. He grasps contradictions, even when unpleasant, and challenges us to look, as he does, at our own behavior in a more honest light. He also finds the pathos in the political and personal challenges of everyday life.

With a sharp wit, remarkable attention to detail, and the same acumen as a writer of prose as he is a playwright, Shawn invites us to look at the world with new eyes, the better to understand--and change it.

Praise for Wallace Shawn and Essays:

"Wallace Shawn writes in a style that is deceptively simple, profoundly thoughtful, fiercely honest. His vocabulary is pungent, his wit delightful, his ideas provocative."--Howard Zinn, author, A People's History of the United States

"Wally Shawn's essays are both powerful and riveting. How rare to encounter someone willing to question the assumptions of class and the disparity of wealth that grows wider every year in this country. To have such a gentle and incisive soul willing to say what others may be afraid to is considerably refreshing."--Michael Moore, film-maker

Shawn's language, his unmistakable, original voice, felicitous, is unadorned, elegant, immediate, true. He's also a brilliant interviewer, as everyone who's seen My Dinner With Andre (which is just about everyone) knows. And, of course, he's very funny."--Tony Kushner, playwright, Angels in America

"Wallace Shawn is a bracing antidote to the op-ed dreariness of political and artistic journalism in the West. He takes you back to the days when intellectuals had the wit and concentration to formulate great questions - and to make the reader want to answer them."--David Hare, playwright

Wallace ShawnWallace Shawn is an Obie Award-winning playwright and a noted stage and screen actor (Star Trek, Gossip Girl, The Princess Bride, Toy Story). His plays The Designated Mourner and Marie and Bruce have recently been produced as films. He is co-author of the movie My Dinner with Andre and author of the plays The Fever, The Designated Mourner, Aunt Dan and Lemon, and Grasses of a Thousand Colours.

Wallace Shawn is an Obie Award-winning playwright and a noted stage and screen actor. His plays The Designated Mourner and The Fever have recently been produced as films, and his translation of Threepenny Opera was recently performed on Broadway. He is co-author of My Dinner with Andre, and the author of The Fever, Aunt Dan and Lemon, among other works.
Loading...
or
Not Currently Available for Direct Purchase