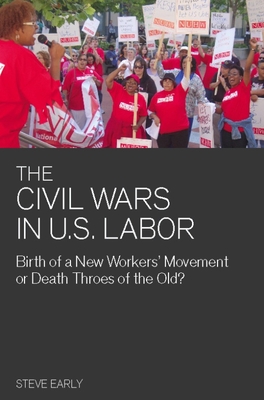 Birth of a New Workers' Movement or Death Throes of the Old? (Ultimate)

BETWEEN 2008 AND 2010, the progressive wing of the U.S. labor movement tore itself apart in a series of internecine struggles. More than $140 million was expended, by all sides, on organizing conflicts that tarnished union reputations and undermined the campaign for real health care and labor law reform. Campus and community allies, along with many rank-and-file union members, were left angered and dismayed.
In this incisive new book, labor journalist Steve Early draws on scores of interviews and on his own union organizing experience to explain why and how these labor civil wars occurred. He examines the bitter disputes about union structure, membership rights, organizing strategy, and contract standards that enveloped SEIU, UNITE HERE, the California Nurses Association, and independent organizations like the Federaci n de Maestros de Puerto Rico and the new National Union of Healthcare Workers in California. Along the way, we meet rank-and-file activists, local union officers, national leaders, and concerned friends of labor who were drawn into the fray.

Steve Early, is a labor journalist and lawyer who has written for numerous publications including The Nation, The Boston Globe, the New York Times, and the Washington Post. He was a Boston-based international representative or organizer for the Communications Workers of America for 27 years, and is a member of the editorial advisory committees of three independent labor publications: Labor Notes, New Labor Forum and Working USA. His first book, from Monthly Review Press, is Embedded With Organized Labor: Journalistic Reflections on the Class War at Home.

Praise For The Civil Wars in U.S. Labor: Birth of a New Workers' Movement or Death Throes of the Old? (Ultimate)…

Steve Early has long been a voice of distinctive clarity, honesty and intellectual seriousness in and about the labor movement.”
Adolph Reed, Jr., professor of political science, University of Pennsylvania


Steve Early’s book describes the kind of anti-union campaigning by management that makes passage of the Employee Free Choice Act so necessary. Early’s account of how and why labor law reform has been stalled for the third time in the last 32 years should be required reading for all workers’ rights advocates. As the author notes, collective bargaining faces private sector extinction. To protect the right to organize, we still need changes in the Wagner Act itselfnot just better appointments to the NLRB.”
U.S. Senator Bernie Sanders (I-Vt.)

Civil Wars in U.S. Labor critiques a union culture that privileges control over the practice of democracy. With an honest eye, the author adds an essential chapter to the long history of rank-and-file efforts to keep unionism vibrant and engaged... compelling reading.”
Vanessa Tait, author, Poor Workers’ Unions

"Civil Wars is as lively as it is detailed... [providing] insights into just what the labor movement can become when democracy takes hold and members get active. It will infuriate some, but inspire many more to build and transform their unions."
Kim Moody, author, U.S. Labor in Trouble and Transition

Although some union leaders may take issue with Steve Early’s blunt and forthright criticism of organized labor, no one can deny the clear and convincing case he makes for labor unity. As Early’s reporting on the fate of Employee Free Choice demonstrates, a union movement that can’t stay united behind basic principles and rights for its members eventually may find itself bereft of any principles, rights or members.”
Linda K. Foley, former president, The Newspaper Guild/CWA, and former member of AFL-CIO Executive Council

Early's journalism is powerful because he has been in the trenches himself fighting to organize workers and make unions more democratic. This book is a must read, particularly for young organizers trying to make sense of contemporary American trade unionism."
Peter Olney, Director of Organizing, International Longshore and Warehouse Union (ILWU)

"Steve Early is not just another scholar situated outside the labor movement. For more than thirty-five years, he helped do the hard work of organizing and collective bargaining. His latest book confirms that there is no one with a better understanding of contemporary union problems. When he warns about the dangers of undemocratic practices, sweetheart deals with employers, and over reliance on the Democratic Party, we had better listen."
Michael Yates, author, Why Unions Matter

Steve Early’s account of recent troubles within and between progressive unions is an engaging and original work. Early is the most tenacious, free-thinking journalist covering labor today, respected by friend and foe alike. Civil Wars is essential to understanding how union centralization and top-down control have failed as a strategy for revitalizing the labor movement.”
Immanuel Ness, professor, Brooklyn College, CUNY, editor, WorkingUSA and author, Immigrants, Unions and The New U.S. Labor Movement.

This is Steve Early at his finest, committed, principled and practical. In Civil Wars, the true SEIU is revealed- no holds barred - its incarnation of corporate unionism is laid bare for all to see. Then, the author follows the remarkable rise of the National Union of Healthcare Workers. His book is a passionate appeal for clean, decent, democratic trade unionism and much more it makes the case, urgently, honestly, for workers’ power.”
Cal Winslow, labor historian and author, Labor’s Civil War In California

Steve Early shows how leading unions are grappling with the trade-offs between contract standards and growth in the private sector. If the quid pro quo for organizing rights includes limiting workers' ability to build a real union and fight for better conditions in the future, that's a serious problem in any labor organization, including my own.”
Sandy Pope, President of Teamsters Local 805 and candidate for IBT President

Civil Wars in U.S. Labor is a passionate, thoroughly researched indictment of recent misdeeds by America's second largest labor organization, the Service Employees International Union. It’s also a cri de coeur for union democracy, not just in principle or as a fine sentiment, but in highly practical ways that are illustrated throughout this rigorously-argued book. Anyone who cares about the future of American labor should read (and study) this 21st Century J’accuse!’”
Jack Metzgar, professor emeritus, Roosevelt University and author, Striking Steel

The pleasures of Early as a writer stem, in part, from his never having had to face the anonymous blandness-generating torture chamber of academic peer review. His opinions have edges and his humor has a delightful snarkiness. If only more texts on labor were as well written or half as funny.”
Robert Ross, Professor of Sociology, Clark University and author, Slaves To Fashion

Civil Wars penetrates the purple haze of confusion about a major union’s painful and destructive estrangement from its own members, other labor organizations, and longtime campus and community allies.”
Randy Shaw, founder, Tenderloin Housing Clinic, co-editor of BeyondChron, and author, Beyond The Fields

Democracy means having a choice and we, the rank-and-file members of NUHW, have been in a great struggle to insure that we do have a choice of unions in California hospitals and nursing homes. Steve Early's book shows that, when workers are faced with dictatorship, they will do what it takes to safeguard their rights and liberties.”
Brenda Washington, LVN and NUHW Executive Board Member

Early’s ability to merge humor and thoughtful analysis sets his work apart from much of the contemporary writing on organized labor, and makes it a strong contender for inclusion in labor extension and labor education curriculum.”
Daisy Rooks, Department of Sociology, University of Montana

Many who join the labor movement and participate in its critical struggles discover, sooner or later, that we are a movement with some major shortcomings. Invariably, if you speak out about these internal problems, you will be asked or told to keep them under wraps. Not Steve Early. In Civil Wars, he takes a hard look at recent union conflicts that became outright fiascos and a source of widespread political outrage.”
Chris Townsend, Political Action Director, United Electrical, Radio and Machine Workers of America (UE)

Steve Early was one of the few North American journalists to report on the struggle of Puerto Rican teachers, when they came under attack by a tainted governor and his political ally, SEIU. As Early demonstrates, unions that combine participatory democracy, member engagement and aggressive action in the workplace provide a much-needed model for the rest of the labor movement.”
Judy Sheridan-Gonzalez, RN, Puerto Rico Solidarity Network and Labor Notes Policy Committee

This is a much needed piece of journalism. The author’s perspective on how 60s activists shaped the labor movement, for better or worse, adds both historical depth and personal flavor to the larger story. Civil Wars deserves a wide audience.”
Kate Titus, former Change To Win organizer

Steve Early takes us inside one of the most important struggles for union democracy in recent years. His book is a reflective, self-critical look at how radical reformers have shaped today’s union movement and how some have contributed to the problems we set out to correct.”
Fernando Gapasin, Labor educator, activist, and co-author of Solidarity Divided

Civil Wars doesn’t just make a principled argument for union democracy and rank-and-file militancy., it demonstrates that they are the key to organizing the unorganized and revitalizing working class resistance in an age of global capitalism. Labor activists and scholars, in both the United States and Canada, will find this book invaluable.”
Peter Brogan, Department of Geography, York University and founding member, Greater Toronto Workers' Assembly

Civil Wars shows how tens of thousands of low-wage womenwho care for the young, the aged, and the infirmhave waged successful organizing campaigns, only to find that they lacked a sufficient voice in their own union. This is a story that only Steve Early could have told, with his insider’s access and rank-and-file orientation. There is no better guide to American labor’s continuing infirmities than this often-controversial but always insightful commentator.”
Jane LaTour, Former Director, Association for Union Democracy Women’s Project and author, Sisters in the Brotherhoods

My own labor council has seen raids on affiliates, driven by forces far from the lives of the workers who meet in our union hall each month. Union civil warfare is often viewed as mere personality conflicts or disputes over jurisdiction.’ Early looks deeper, at the tough debates about how to rebuild the labor movement and the nature of the movement we are trying to build.”
Jeff Crosby, President, IUE-CWA Local 201, and North Shore Central Labor Council