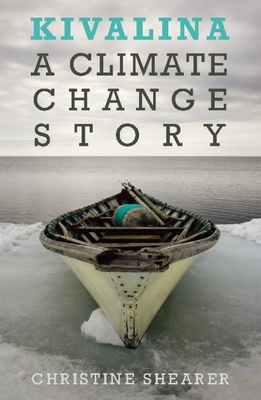 For the people of Kivalina, Alaska, the price of further climate change denial could be the complete devastation of their lives and culture. Their village must be relocated to survive, and neither the fossil fuel giants nor the U.S. government are willing to take full responsibility.

This story is a tragedy, and not just because of what’s happening to the people of Kivalina. It’s a tragedy because it’s unnecessary, the product, as the author shows, of calculation, deception, manipulation, and greed on the part of some of the biggest and richest companies on earth.”

Bill McKibben, author of Eaarth: Making a Life on a Tough New Planet

I watched the lights of the oil fields grow in intensity and proximity, although they were many miles away. The flaring of the gas became a harbinger of hard nights on call, due to increases in respiratory illness among our people. Compounding this were changes to the land and water around us, affecting the animals and their [habits]. This book provides an understanding of the obstacles I have been facing while working on the basic issues of promoting and protecting the health, culture, and traditions of our people.”

Rosemary Ahtuanguaruak, board member of the Inupiat Community of the Arctic Slope, founding member of REDOIL (Resisting Environmental Destruction on Indigenous Lands), and community health practitioner

Shearer pulls no punches in this extraordinary account of one Alaskan village’s confrontation with the violence of climate change. Villagers sued fossil fuel companies for endangering their homeland and lying about it, underscoring the importance of sound science, traditional knowledge, and accurate information as critical ingredients for sustaining the climate justice movement. Shearer also considers the history of the Product Defense Industry, through which she links the politics of energy to a host of other sectors whose supporters have made it their business to manufacture doubt and misrepresentation about the risks associated with oil, coal, asbestos, lead, and tobacco. The casualties are adding up and they include public health, ecosystems, and our democracy. So where is the hope in all of this? It lies in the simple fact that the people of Kivalina fought back and struggled for a
better world for themselves and for all of us.”

David Naguib Pellow, member of the board of directors of Greenpeace USA, author of Resisting Global Toxics: Transnational Movements for Environmental Justice, and Don Martindale Professor of Sociology at the University of Minnesota

Christine Shearer’s Kivalina: A Climate Change Story is a fast and bumpy ride that begins with the history of outrageous corporate deceptions through public relations and legal campaigns, continuing with building of the coal-and-oil empire to fuel progress in the United States, leading to the horrendous politics of climate crisis, and finally arriving at its destination, a ground-zero of climate
refugee, Kivalinaan Inupiat community along the Chukchi Sea coast of arctic Alaska. I was angry when I turned the last page. I urge you to get a copy, read it, share the story, and join the now global climate justice movement.”

The climate catastrophe is real and growing, and this is the story of some of its first known victims, with many millions more to follow. This is an important tale of greed and propaganda, scientific corruption, and the bill coming due for our allowing a corporate elite to control and dictate our energy
and environmental policies.”

John Stauber, founder of the Center for Media and Democracy

With Kivalina Christine Shearer has managed to do something quite remarkable, which is to take the incredibly complex geo/economic/political process of global climate change, present it in a way that is both comprehensible and compelling and then directly link it to one of the first bellwether communities to be affected by the process. The book is beautifully written and the community of Kivalina is a harbinger of what our failure to control our technology and our greed will be bringing to coastal communities and cities across the planet."

Robert Gramling, coauthor of Blowout in the Gulf: The BP Oil Spill Disaster and the Future of Energy in America and professor of sociology at the University of LouisianaLafayette

Kivalina, Shishmaref, Point Hopethree of the first communities, in this case all in the Arctic of Alaska, that are casualties of global climate change. Household names? No. But they should be. Christine Shearer, in Kivalina: A Climate Change Story, presents the human and environmental evidence of frustration and devastation of one of these ancient Inupiat Eskimo villages in a detailed and compelling fashion. Citing the tobacco and asbestos examples of profit at all costs” corporate obfuscation, she makes the case that climate change is the latest on this sorry list of the failure of our corporations and their supporters in the federal and state government to look past
those profits to their dire consequences. Peter, Paul, and Mary in their famous folk song, When Will They Ever Learn,” can add another verse. Christine Shearer will write it.”

Christine Shearer, PhD, is the Senior Researcher at the energy and climate organization CoalSwarm. She previously worked as postdoctoral scholar in Earth System Science at the University of California in Irvine, as a research fellow at the National Center for Ecological Analysis and Synthesis, and as a reporter for the Center for Investigative Reporting. Her writing has appeared in science and media publications including Nature, Environmental Research Letters, National Geographic, and The New York Times. She received her PhD in Sociology from the University of California at Santa Barbara.
Loading...
or support indie stores by buying on
(This book is on backorder)