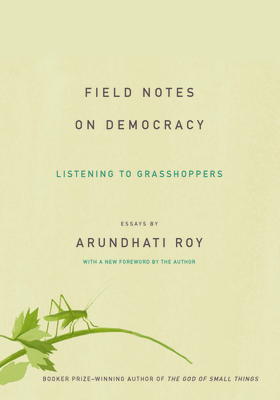 "Gorgeously wrought . . . pitch-perfect prose. . . . In language of terrible beauty, she takes India's everyday tragedies and reminds us to be outraged all over again."--Time Magazine

"Roy asks whether our shriveled forms of democracy will be 'the endgame of the human race'--and shows vividly why this is a prospect not to be lightly dismissed."--Noam Chomsky

"Roy is one of the most confident and original thinkers of our time."--Naomi Klein

Now in paperback, with a new introduction by the author discussing the election of India's new prime minister Narendra Modi.

This series of essays examines the dark side of democracy in contemporary India. It looks closely at how religious majoritarianism, cultural nationalism, and neo-fascism simmer just under the surface of a country that projects itself as the world's largest democracy.

She describes the systematic marginalization of religious and ethnic minorities, the rise of terrorism, and the massive scale of displacement and dispossession of the poor by predatory corporations.

Field Notes on Democracy tracks the fault-lines that threaten to destroy India's precarious democracy and send shockwaves through the region and beyond.

Arundhati Roy is a world-renowned Indian author and global justice activist. From her celebrated Booker Prize-winning novel The God of Small Things to her prolific output of writing on topics ranging from climate change to war, the perils of free-market development in India, and the defense of the poor, Roy's voice has become indispensable to millions seeking a better world.

Arundhati Roy studied architecture in New Delhi, where she now lives. She is the author of the novel The God of Small Things, for which she received the 1997 Booker Prize. The novel has been translated into forty languages worldwide. She has written several non-fiction books, including Field Notes on Democracy: Listening to Grasshoppers and Capitalism: A Ghost Story, published by Haymarket Books.
or support indie stores by buying on
Copyright © 2020 American Booksellers Association