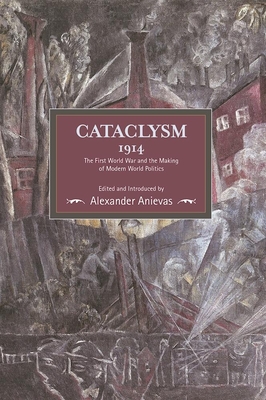 Cataclysm 1914 brings together a number of leftist scholars from a variety of fields to explore the many different aspects of the origins, trajectories and consequences of the First World War. The collection not only aims to examine the war itself, but seeks to visualize the conflict and all of its immediate consequences (such as the Bolshevik Revolution and the ascendancy of US hegemony) as a defining moment in 20th century world politics, a moment which ruptured and reconstituted the 'modern' epoch in its many instantiations. Contributors are: Alexander Anievas, Shelley Baranowski, Neil Davidson, Geoff Eley, Sandra Halperin, Esther Leslie, Lars T. Lih, Domenico Losurdo, Wendy Matsumura, Peter D. Thomas, Adam Tooze, Alberto Toscano, and Enzo Traverso

Alexander Anievas Ph.D. (2011), University of Cambridge, Leverhulme Early Career Research Fellow. He is the author of Capital, the State, and War: Class Conflict and Geopolitics in the Thirty Years Crisis, 1914-1945 (University of Michigan Press, 2014).
Loading...
or support indie stores by buying on