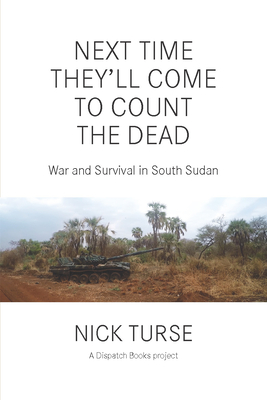 Next Time They'll Come to Count the Dead

A dramatic, true story of men and women trapped in the grip of war, Next Time They'll Come to Count the Dead is modern crisis reporting at its best. For six weeks in the Spring of 2015, award-winning journalist Nick Turse traveled on foot as well as by car, SUV, and helicopter around war-torn South Sudan talking to military officers and child soldiers, United Nations officials and humanitarian workers, civil servants, civil society activists, and internally displaced persons-people whose lives had been blown apart by a ceaseless conflict there. In fast-paced and dramatic fashion, Turse reveals the harsh reality of modern warfare in the developing world and the ways people manage to survive the unimaginable. Next Time They'll Come to Count the Dead isn't about combat, it's about the human condition, about ordinary people thrust into extraordinary circumstances, about death, life, and the crimes of war in the newest nation on earth.

Nick Turse is the managing editor of TomDispatch.com and a fellow at the Nation Institute. An award-winning investigative journalist and the author of the widely hailed, bestselling book Kill Anything That Moves, he has reported from the Middle East, Southeast Asia, and Africa and his pieces have appeared in the New York Times, the Los Angeles Times, The Nation, The Intercept, and regularly at TomDispatch.
or support indie stores by buying on
(This book is on backorder)