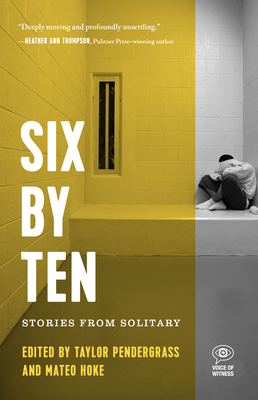 Stories from Solitary (Voice of Witness)

Six by ten feet. That's the average size of the cells in which tens of thousands of people incarcerated in the United States linger for weeks, months, and even decades in solitary confinement. With little stimulation and no meaningful human contact, these individuals struggle to preserve their identity, sanity, and even their lives. In thirteen intimate narratives, Six by Ten explores the mental, physical, and spiritual impacts of America's widespread embrace of solitary confinement. Through stories from those subjected to solitary confinement, family members on the outside, and corrections officers, Six by Ten examines the darkest hidden corners of America's mass incarceration culture and illustrates how solitary confinement inflicts lasting consequences on families and communities far beyond prison walls. Stories include those of Brian, who was shuttled from prison to prison across Illinois as part of an unofficial program that came to be known as "the circuit"; Heather, a mother fighting for the life of her son, Nikko, who was diagnosed as bipolar at a young age and sent to solitary as a teenager; and Sonya, a trans woman sent to solitary in a men's jail in Texas, supposedly for her own protection.

Taylor Pendergrass is a lawyer and activist focused on criminal justice reform. He currently works for the American Civil Liberties Union.

Mateo Hoke is writer, journalist, and co-editor of Palestine Speaks: Narratives of Life Under Occupation.