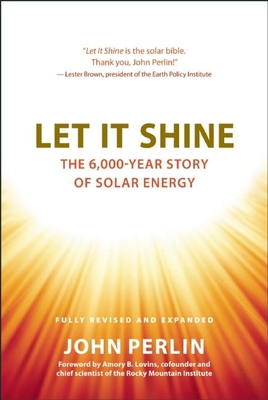 Even as concern over climate change and energy security fuel a boom in solar technology, many still think of solar as a twentieth-century wonder. Few realize that the first photovoltaic array appeared on a New York City rooftop in 1884, or that brilliant engineers in France were using solar power in the 1860s to run steam engines, or that in 1901 an ostrich farmer in Southern California used a single solar engine to irrigate three hundred acres of citrus trees. Fewer still know that Leonardo da Vinci planned to make his fortune by building half-mile-long mirrors to heat water, or that the Bronze Age Chinese used hand-sized solar-concentrating mirrors to light fires the way we use matches and lighters today. With thirteen new chapters, Let It Shine is a fully revised and expanded edition of A Golden Thread, Perlin's classic history of solar technology, detailing the past forty years of technological developments driving today's solar renaissance. This unique and compelling compendium of humankind's solar ideas tells the fascinating story of how our predecessors throughout time, again and again, have applied the sun to better their lives -- and how we can too.

An international expert on solar energy and forestry, John Perlin has lectured extensively on these topics in North America, Europe, Asia, and Australia. Perlin is the author of A Forest Journey: The Story of Wood and Civilization as well as From Space to Earth: The Story of Solar Electricity. Perlin mentors those involved in realizing photovoltaic, solar hot-water, and energy-efficiency technologies at the University of California, Santa Barbara (UCSB), and coordinates the California Space Grant Consortium as a member of UCSB's department of physics.
Loading...
or
Not Currently Available for Direct Purchase