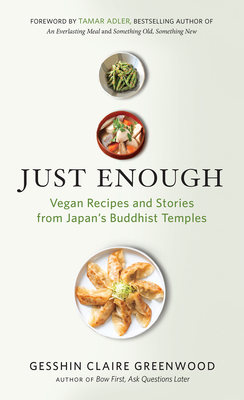 Fresh out of college, Gesshin Claire Greenwood found her way to a Buddhist monastery in Japan and was ordained as a Buddhist nun. Zen appealed to Greenwood because of its all-encompassing approach to life and how to live it, its willingness to face life's big questions, and its radically simple yet profound emphasis on presence, reality, the now. At the monastery, she also discovered an affinity for working in the kitchen, especially the practice of creating delicious, satisfying meals using whatever was at hand -- even when what was at hand was bamboo. Based on the philosophy of oryoki, or "just enough," this book combines stories with recipes. From perfect rice, potatoes, and broths to hearty stews, colorful stir-fries, hot and cold noodles, and delicate sorbet, Greenwood shows food to be a direct, daily way to understand Zen practice. With eloquent prose, she takes readers into monasteries and markets, messy kitchens and predawn meditation rooms, and offers food for thought that nourishes and delights body, mind, and spirit.

Gesshin Claire Greenwood is the author of Bow First, Ask Questions Later and the popular blog That's So Zen. She trained in Japanese Zen monasteries, including in the kitchen, for several years before returning to the United States to obtain a master's degree in East Asian Studies. She lives in San Francisco, where she cooks, teaches meditation, and works in the mental-health field.
Loading...
or support indie stores by buying on