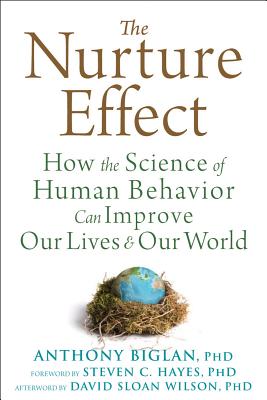 A fascinating look at the evolution of behavioral science, the revolutionary way it's changing the way we live, and how nurturing environments can increase people's well-being in virtually every aspect of our society, from early childhood education to corporate practices. If you want to know how you can help create a better world, read this book.

What if there were a way to prevent criminal behavior, mental illness, drug abuse, poverty, and violence? Written by behavioral scientist Tony Biglan, and based on his ongoing research at the Oregon Research Institute, The Nurture Effect offers evidence-based interventions that can prevent many of the psychological and behavioral problems that plague our society.

For decades, behavioral scientists have investigated the role our environment plays in shaping who we are, and their research shows that we now have the power within our own hands to reduce violence, improve cognitive development in our children, increase levels of education and income, and even prevent future criminal behaviors. By cultivating a positive environment in all aspects of society--from the home, to the classroom, and beyond--we can ensure that young people arrive at adulthood with the skills, interests, assets, and habits needed to live healthy, happy, and productive lives.

The Nurture Effect details over forty years of research in the behavioral sciences, as well as the author's own research. Biglan illustrates how his findings lay the framework for a model of societal change that has the potential to reverberate through all environments within society.

Anthony Biglan, PhD, is a senior scientist at Oregon Research Institute, and a leading figure in the development of prevention science. His research over the past thirty years has helped to identify effective family, school, and community interventions to prevent the most common and costly problems of childhood and adolescence. He is a leader in efforts to use prevention science to build more nurturing families, schools, and communities throughout the world. Biglan lives in Eugene, OR. Foreword writer Steven C. Hayes, PhD, is Nevada Foundation Professor in the department of psychology at the University of Nevada. An author of thirty-four books and more than 470 scientific articles, he has shown in his research how language and thought leads to human suffering. He cofounded acceptance and commitment therapy (ACT)--a powerful therapy method that is useful in a wide variety of areas. Hayes has been president of several scientific societies and has received several national awards, including the Lifetime Achievement Award from the Association for Behavioral and Cognitive Therapies. Afterword writer David Sloan Wilson, PhD, is president of the Evolution Institute and SUNY distinguished professor of biology and anthropology at Binghamton University. He applies evolutionary theory to all aspects of humanity, in addition to the biological world. His books include Darwin's Cathedral, Evolution for Everyone: How Darwin's Theory Can Change the Way We Think About Our Lives, The Neighborhood Project, and Does Altruism Exist?
Loading...
or
Not Currently Available for Direct Purchase