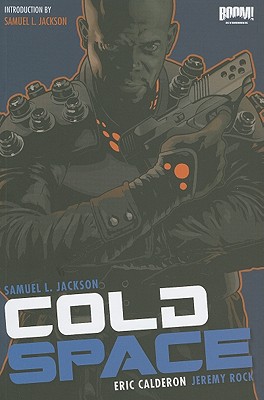 From Academy Award-nominee Samuel L. Jackson and Eric Calderon, the team that brought you the Emmy-award-winning, best-selling AFRO SAMURAI comes their next original series-COLD SPACE.

From Academy Award-nominee Samuel L. Jackson and Eric Calderon, the team that brought you the Emmy-award-winning, best-selling AFRO SAMURAI comes their next original series-COLD SPACE. When an on-the-run outlaw crash-lands on a hostile planet on the brink of civil war, he finds himself in the crossfire between two warring factions. But in chaos lies opportunity-because where there's money to be made. A hard-boiled sci-fi action-adventure with covers by Eisner Award-winning artist Dave Johnson and IRREDEEMABLE cover artist Jeffrey Spokes!

Eric Calderon was nominated for an Emmy in 2009 for his writing on breakthrough series AFRO SAMURAI, a project he also discovered, developed, and co-produced with Samuel L. Jackson. Prior to that, Eric worked at MTV in charge of development for 6 years where his team developed shows like CELEBRITY DEATH MATCH, DARIA, THE MAXX, and AEON FLUX. Eric is also currently writing and producing an original hardbound kids book called TOP DOG and runs his own development production company Wild Boar Media, Inc.

Jeremy Rock's most recent work includes the comic series NARCOPOLIS with Jaime Delano as well as numerous titles with BOOM! Studio such as CTHULHU TALES, and SALEM: QUEEN OF THORNS.
or support indie stores by buying on
(This book is on backorder)