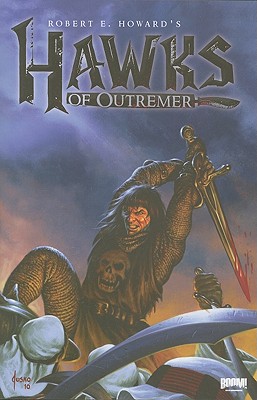 Conan creator Robert E. Howard's epic story in graphic novel form for the first time ever Adapted from the story by Robert E. Howard, creator of the legendary character CONAN THE BARBARIAN Cormac FitzGeoffrey, a wandering warrior born and bred on the battlefield, is a renowned fighter, a ruthless adversary, and a man that is no stranger to the ways of bloodshed and violence. Cormac counts his friends on only one hand, so when he learns that his most recent liege has been murdered; nothing will stop his quest for revenge. By oath, a path of vengeance will be marked by the blood of his enemies. Featuring covers by fan-favorite THE SAVAGE SWORD OF CONAN artist Joe Jusko.

Robert Ervin Howard (January 22, 1906 - June 11, 1936) was an American author who wrote pulp fiction in a diverse range of genres. Best known for his character CONAN THE BARBARIAN, he is regarded as the father of the sword and sorcery genre. Michael Alan Nelson is the author of the critically acclaimed comic HEXED, DINGO as well as FALL OF CTHULHU from BOOM! Studios. He is a winner of the 2004 New Times 55 Fiction contest for his short-short "The Conspirators" and is currently working on several projects for BOOM! Studios including the smash-hit series THE CALLING. He lives in Los Angeles. Damian Couceiro, part of the recent wave of talented Argentine artists, is a hot up-and-coming comic book artist best known for his work on the BOOM! Studios' graphic novel NOLA. He has worked on projects such as THE DIVISION, and FULL MOON FEVER by Joe Casey. Couceiro has been praised for his dark, gritty style.
Loading...
or support indie stores by buying on