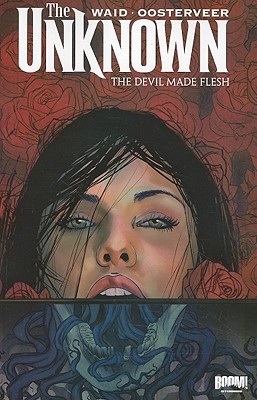 The Devil Made Flesh

She has solved every mystery known to man. But there is one mystery that remains... UNKNOWN Join legendary comic writer Mark Waid (KINGDOM COME) for another adventure of this critically acclaimed supernatural thriller Mark Waid brings another installment of the world's greatest detective With only six months to live, Catherine Allingham's terminal condition finally reaches critical mass . But nothing will stop her from trying to solve even more mysteries. With the clock ticking down to the inevitable, what sort of deal with the devil will Doyle have to make for Catherine's soul? Find out in this thrilling final volume of the critically acclaimed series.

Mark Waid, Alabama native and current Los Angeleno, has written stories for every major comics publisher, and his seminal graphic novel, KINGDOM COME, is one of the best-selling graphic novels of all time. Minck Oosterveer, a native of The Netherlands, began his comic work in 2002 with "Nicky Saxx," a daily news comic strip for De TeleGraaf. Oosterveer debuted in US with a story in BOOM! Studios critically acclaimed anthology series ZOMBIE TALES.
Loading...
or
Not Currently Available for Direct Purchase