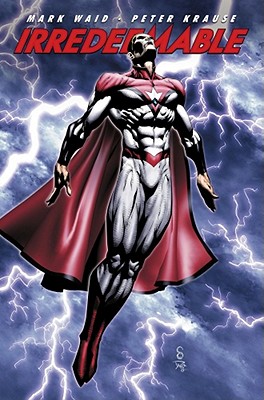 Legendary comic writer Mark (KINGDOM COME) Waid takes superhero comics to the next level Don't miss Volume 7 of BOOM 's Eisner and Harvey Award-nominated ongoing superhero series from comics legend Mark Waid IRREDEEMABLE has taken the comic book industry by storm by daring to ask the question: what if the world's greatest hero decided to become the world's most savage villain? What happens to a world when a savior betrays it...and who can stop him? A "twilight of the superheroes"-style story that examines the nature of good and evil from the writer of KINGDOM COME and EMPIRE.

Mark Waid, Alabama native and current Los Angeles resident, has written stories for every major comic book publisher, and his seminal graphic novel, KINGDOM COME, for DC Comics, is one of the best-selling graphic novels of all time. For BOOM! Studios, he has written bestselling graphic novels POTTER'S FIELD, INCORRUPTIBLE and the multiple Eisner and Harvey Award-nominated IRREDEEMABLE. Peter Krause is an American comic book artist. He is best known for his work on various DC Comics titles, most notably the Superman-related titles and THE POWER OF SHAZAM! with Captain Marvel and the Marvel Family. Krause, a graduate of the University of Minnesota, currently works as a freelance illustrator in Minnesota.
or
Buy Here
(This book is on backorder)
Copyright © 2020 American Booksellers Association