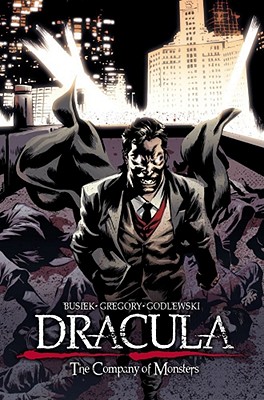 It's bloodsuckers vs. bloodsucker in this new original graphic novel from the mind of legendary comic book writer Kurt Busiek. A powerful, predatory corporation acquires a valuable asset - Dracula himself They think they own him, but no one can own the Son of the Dragon. There's a monster in their midst that puts Hannibal Lecter to shame - and he plans to gain his freedom in blood. It's bloodsuckers vs. bloodsucker in the third volume of the new horror graphic novel critics are raving about. Legendary comics writer Kurt Busiek, along with award-winning author Daryl Gregory and sensational artist Scott Godlewski, take you through the dark corridors of the American corporate boardroom and show you vampires aren't the only kind of bloodsuckers.

Multiple Eisner Award-winning superstar comic book writer Kurt Busiek has written everything from SUPERMAN to SPIDERMAN alongside his own creation, fan-favorite ASTRO CITY. In 2003, Busiek was picked by Marvel Comics and DC Comics to pen the best-selling JLA / AVENGERS crossover event; the first and only meeting between the two competing franchises. Daryl Gregory's first novel, PANDEMONIUM, appeared from Del Rey Books in 2008 and won the Crawford Award for 2009. It was also a finalist for several other awards, including the Shirley Jackson Award and the World Fantasy Award. His second novel, THE DEVIL'S ALPHABET, appeared in November, 2009, and was named one of the best books of the year by Publishers Weekly. Scott Godlewski is co-creator of MYSTERIOUS ADVENTURE MAGAZINE and a freelance comic book illustrator and writer living in Mesa, Arizona.
Loading...
or
Not Currently Available for Direct Purchase