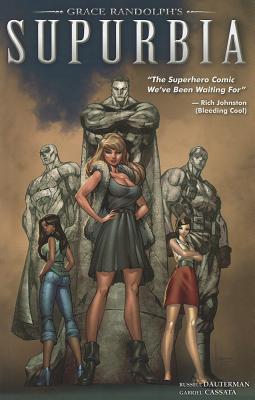 What goes down when the capes come off?

Meet the "Real Housewives" of Earth's greatest super-team, the Meta Legion! It's the egos, the tantrums, and the betrayals of the super set. Find out what happens behind the masks as superhero families are faced with the sordid problems of everyday life - and then some! From rising star writer Grace Randolph (Marvel’s NATION X, HER-OES) and hot new artist Russell Dauterman, this series takes the familiar super-team and turns it on its head with a scandalous, TMZ-fueled look at what it's like to live with a superhero!

Grace Randolph is the creator and host of Beyond the Trailer, one of the top entertainment news shows on YouTube. It averages 4.5 million views each month and had 50 million views in 2011. In the world of comics, Grace is known for her writing on Marvel’s NATION X and HER-OES, FRAGGLE ROCK for Archaia, and STARCRAFT and WARCRAFT titles with Tokyopop. Russell Dauterman is a Los Angeles-based artist with experience in both children’s books and the film industry, having worked as a costume designer for the Captain America film.
or
Not Currently Available for Direct Purchase
Copyright © 2020 American Booksellers Association