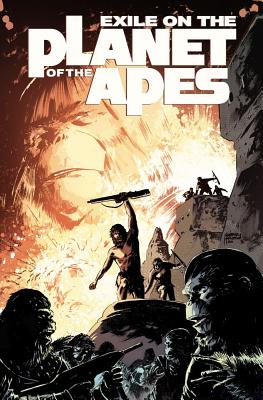 Exile on the Planet of the Apes (Paperback)

Set in the universe of the classic Planet of the Apes series comes an all new story of fan favorite characters including Doctor Zaius From the team that brought you BETRAYAL OF THE PLANET OF THE APES comes an all new Apes saga Gabriel Hardman (HULK, AGENTS OF ATLAS) and Corinna Bechko (HEATHENTOWN, FEAR ITSELF: THE HOME FRONT) team up with red hot artist Marc Laming (AMERICAN CENTURY, THE RINSE) to take the fan-favorite franchise to all new heights in this can't-miss mini-series. With ape society gripped in uncertainty, Doctor Zaius must find a way to unite the warring factions before they rip the city apart. It's up to one lowly chimp to seek out the famed, disgraced General Aleron deep in the heart of the Forbidden Zone, with a secret that might help -- or destroy.

Gabriel Hardman has drawn HULK, and AGENTS OF ATLAS for Marvel Comics as well as HEATHENTOWN for Image/Shadowline. He is an accomplished motion picture illustrator whose credits include Spider-Man 3, X2: X-Men United, Superman Returns, Tropic Thunder and Inception. He also directed the prize winning short film Wrong Way Up, which premiered at the Seattle International Film Festival. Corinna Bechko is a Los Angeles-based writer known for her work on the graphic novel HEATHENTOWN and the BOOM! Studios series BETRAYAL ON THE PLANET OF THE APES. Marc Laming an illustrator and comic book artist living in the UK. He has worked on comic books for DC/Vertigo, Fleetway and currently Boom! Studios, as well as television & animation projects and storyboards, and visuals for record companies.
or
Not Currently Available for Direct Purchase
Copyright © 2020 American Booksellers Association