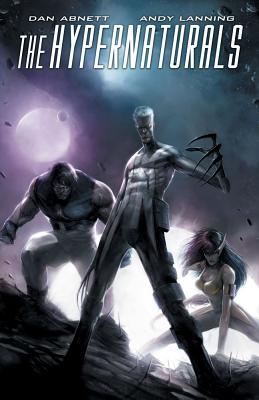 In the far future... A UNIVERSE TREMBLES. It is the far future; the human race has finally colonized the galaxy, preserving an era of prosperity that's only possible because of The Hypernaturals. They're a celebrated, galaxy-wide superhero task force that keeps the peace. That is, until they all mysteriously vanish. Now, as the galaxy teeters on the brink of chaos, it's up to a group of retired and long forgotten Hypernaturals -- and their novice recruits -- to save the galaxy from complete destruction. Dan Abnett and Andy Lanning, the superstar writing duo behind ANNIHILATION and THE LEGION, launch an all-new original graphic novel series that takes cosmic super-heroes to a new frontier.

Dan Abnett is a seven-times New York Times bestselling author and an award-winning comic book writer. He has written over fifty novels, including the acclaimed Gaunt's Ghosts series, the Eisenhorn and Ravenor trilogies, volumes of the million-selling Horus Heresy series, The Silent Stars Go By (Doctor Who), Rocket Raccoon and Groot: Steal the Galaxy, The Avengers: Everybody Wants To Rule The World, The Wield, Triumff: Her Majesty's Hero, and Embedded. In comics, he is known for his work on The Legion of Super-Heroes, Aquaman, The Titans, Nova, Wild's End, and The New Deadwardians. His 2008 run on The Guardians of the Galaxy for Marvel formed the inspiration for the blockbuster movie. A regular contributor to the UK's long-running 2000 AD, he is the creator of series including Grey Area, Lawless, Brink, Kingdom and the classic Sinister Dexter. He has also written extensively for the games industry, including Shadow of Mordor and Alien: Isolation
Loading...
or
Not Currently Available for Direct Purchase