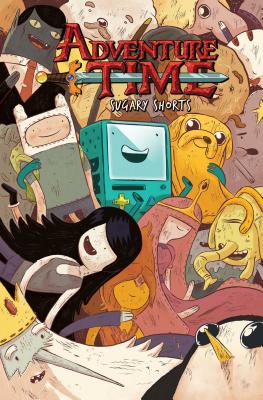 The sugary short stories from the all-ages smash hit are finally collected in this affordable soft cover!

Comic creators from around the world unite to celebrate all things ADVENTURE TIME in this collection of incredibly original mini-adventures. Starring all of your favorite characters from Finn and Jake to Hot Dog Princess and Peppermint Butler, SUGARY SHORTS Volume One is a syrupy salute to the Land of Ooo that is sure to satisfy your sweet tooth.

PAUL POPE is an American alternative comic book writer/artist. Pope describes his own influences (listed in his book P-City Parade) as Daniel Torres, Bruno Premiani, Jack Kirby, Alex Toth, Tony Salmons, Hugo Pratt, Silvio Cadelo, Vittorio Giardino, and Hergé. AARON RENIER was born and raised in Green Bay Wisconsin. He has been drawing comics, in one way or another, for as long as he can remember. His illustrations have appeared in a wide variety of places, including turning an entire city bus into a moving aquarium. He won the Eisner award for cartoonist deserving wider recognition for his first graphic novel Spiral-Bound. He is the illustrator of a series of books about the knights of the roundtable by Gerald Morris, and a picture book by Alice Shertle titled An Anaconda Ate My Homework. He lives in Chicago IL, with his dog trusty hound, Beluga. CHRIS HOUGHTON is a published artist & designer living in Los Angeles with his wife, Kassandra. ANTHONY CLARK is a cartoonist known for his hilarious work that can be found at nerdriod.com. When he's not drawing his own work, he can often be found coloring comics for other creators.
Loading...
or support indie stores by buying on
(This book is on backorder)