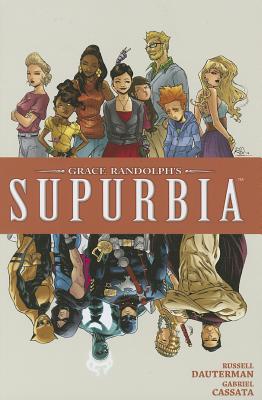 The Real Housewives of the World's Most Powerful Superheroes are back...and back-stabbing each other. The Galactic Protection Systems Expo has ended in tragedy, leaving the Meta Legion in tatters. With Helen and Gio captured by evil forces and Sovereign gone AWOL, the remaining heroes band together to confront Hector Hunt in his magic realm -- but will it be enough to save Zari from the evil growing inside her? From rising star writer Grace Randolph (Marvel's NATION X, HER-OES) and hot new talent Russell Dauterman, GRACE RANDOLPH'S SUPURBIA is a unique new twist on the superhero genre that takes a scandalous, TMZ-fueled look at what it's like to live with a superhero.

Grace Randolph is the creator and host of Beyond the Trailer, one of the top entertainment news shows on YouTube. It averages 4.5 million views each month and had 50 million views in 2011. In the world of comics, Grace is known for her writing on Marvel's Nation X and Her-oes, Fraggle Rock for Archaia, and Starcraft and Warcraft titles with Tokyopop. Russell Dauterman is a Los Angeles-based artist with experience in both children's books and the film industry, having worked as a costume designer for the Captain America film. Collecting the critically acclaimed fourth arc of GRACE RANDOLPH'S SUPURBIA, join Hella, Eve, Gio, Zari, and Sara as the evil shapeshifter "Ruth's" ultimate plans come to fruition and the war is brought to the homefront!
Loading...
or
Not Currently Available for Direct Purchase