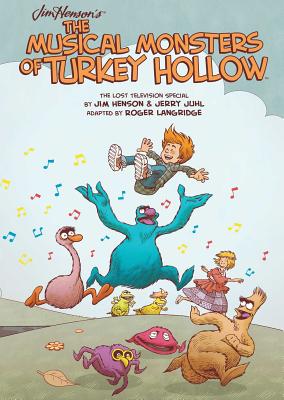 The lost screenplay by Jim Henson brought to life by Roger Langridge In the spring of 1968, Jim Henson and his longtime writing partner were working together to create an original Thanksgiving TV special called The Musical Monsters of Turkey Hollow, which was to be directed by Jim and feature original songs by Joe Raposo of Sesame Street fame. Henson went as far as building the puppets for the special, but no network committed to the project and the script was filed away in the Jim Henson Company Archives. After the success of Archaia's Eisner Award-winning graphic novel Jim Henson's Tale of Sand, we are proud to partner with the Jim Henson Company to bring to life another previously unknown piece of the Jim Henson Legacy. The only thing more exciting than finding the script for the project was securing the talents of the amazing Roger Langridge (writer and illustrator of the Eisner Award-winning Snarked) to adapt and illustrate the project Eisner and Harvey-Award winner Roger Langridge is the mastermind behind Snarked and the beloved run of The Muppet Show comics, and now he gets to bring to life hilarious, never-before-seen puppet creations by Jim Henson in an oversized all-ages adventure. Turkey Hollow is a picturesque town where hundreds of years ago, unbeknownst to the citizens, a meteorite landed nearby a small brook on the outskirts of town. One Thanksgiving, while young Timmy Henderson practices his guitar, he's accompanied by strange, unearthly, musical sounds. That meteorite wasn't a rock at all but an egg holding seven furry, goofy monsters, each with a unique musical sound. After the initial shock, Timmy befriends the lovable creatures following him all around Turkey Hollow. Not everyone takes a liking to the visitors though and it's up to Timmy to protect his new friends and save Thanksgiving.

James Maury Jim Henson (September 24, 1936 - May 16, 1990) was an American puppeteer, artist, cartoonist, Imagineer, inventor, screenwriter, film director and producer, best known as the creator of The Muppets. As a puppeteer, Henson performed in various television programs, such as Sesame Street and The Muppet Show, films such as The Muppet Movie and The Great Muppet Caper, and created advanced puppets for projects like Fraggle Rock, The Dark Crystal, and Labyrinth. He was also an Academy Award-nominated film director (for his short film Time Piece), Emmy Award-winning television producer, and the founder of The Jim Henson Company, the Jim Henson Foundation, and Jim Henson's Creature Shop. Jerry Juhl was an American television, movie writer, and Jim' Henson's frequent writing partner, best known for his work with Jim Henson's Muppets. Roger Langridge has been producing comics for over twenty years. Most recently, he has attracted critical attention for his work on the Harvey Award-winning Muppet Show Comic Book (Boom! Studios) and Thor: The Mighty Avenger (Marvel Comics); other works of note include Marvel's Fin Fang Four, Fantagraphics' Zoot! and Art d'Ecco (in collaboration with his brother Andrew), and the NCS, Ignatz, Eisner and Harvey Award-nominated comic book Fred the Clown. He currently lives in London with his wife Sylvie, their two children and a box of his own hair.
Loading...
or
Not Currently Available for Direct Purchase