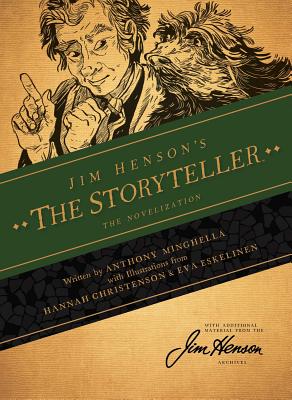 Finally back in print and in a gorgeous new hardcover, Jim Henson's The Storyteller features nine folktales based on Henson's Emmy-award winning television series, beautifully told by Academy Award-winning director Anthony Minghella. Before writing the Academy Award-winning classic The English Patient and being nominated for the Academy Award for Best Adapted Screenplay for The Talented Mr. Ripley, the late Anthony Minghella worked alongside Jim Henson to bring forgotten tales of European folklore to vivid life on television. The series debuted to critical acclaim and in deference to the tales that inspired Henson and the series, Minghella adapted the nine stories into prose. Accompanied by stunning illustrations from an array of artistic talent and style, these tales are the early work of an incredible storyteller and are part of a series of novels being printed by Archaia and the Jim Henson company that celebrate the creative spirit of Jim Henson and his collaborators. In his introduction Minghella dedicates the book and these stories to his son Max, writing, "I have tried to fill his days with their magic just as he has filled my days with his own." Now, long after taken out of print, fans can share the magic of these stories and the master storyteller who crafted them, with readers of all ages.

James Maury "Jim" Henson was an American puppeteer, artist, cartoonist, Imagineer, inventor, screenwriter, film director and producer, best known as the creator of The Muppets. As a puppeteer, Henson performed in various television programs, such as Sesame Street and The Muppet Show, films such as The Muppet Movie and The Great Muppet Caper, and created advanced puppets for projects like Fraggle Rock, The Dark Crystal, and Labyrinth. He was also an Academy Award-nominated film director (for his short film Time Piece), Emmy Award-winning television producer, and the founder of The Jim Henson Company, the Jim Henson Foundation, and Jim Henson's Creature Shop.
Loading...
or support indie stores by buying on
(This book is on backorder)