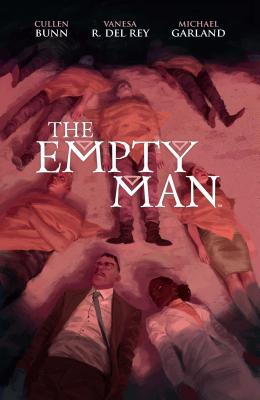 The Empty Man made me do it

It’s been one year since the first reported case of the Empty Man disease, and no drug has been able to slow its progress. The cause is unknown, and the symptoms include fits of rage, hideous hallucinations, suicidal dementia, followed by death, or a near lifeless, "empty" state of catatonia. As cults rise nationwide, the FBI and CDC enter a joint investigation of the Empty Man, hoping to piece together clues to stop the cult and uncover a cure. THE EMPTY MAN is a dystopic version of the world we know, where a terrifying disease has taken on almost deific connotations.

Writer Cullen Bunn has skyrocketed to comics fame in a very short period of time, thanks to a variety of titles including his Supernatural Western epic THE SIXTH GUN, and tackling some of comics' most popular antiheroes such as MAGNETO and SINESTRO. Vanesa R. Del Rey's art has been met with rapturous acclaim, including a Russ Manning nomination for her work on HIT.

As of 2018, Bunn writes X-Men: Blue and Venomized for Marvel, PumpkinHead for Dynamite, Subspecies for Action Lab, Shadow Roads for Oni Press, Regression for Image, Unholy Grail, Brothers Dracul and Harrow County for Dark Horse, as well as comics for BOOM! Studios.
Loading...
or support indie stores by buying on
(This book is on backorder)