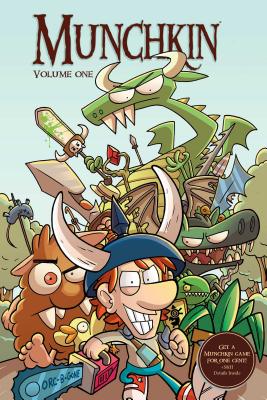 Kill the monsters. Steal the treasure. Stab your buddy.

Based on the immensely popular Steve Jackson card game, Munchkin comes to comics! Munchkin takes place in a mashup of genres. Originally a satire of fantasy roleplaying, it has since then taken on non-fantasy and non-gaming elements. Characters in Munchkin change constantly but never permanently. What do Munchkins do? They play for the win. They are rules lawyers. They backstab. They gloat. They whine when someone else backstabs or gloats. Munchkins are emotional. Munchkins may be clever, but they are never wise. Munchkins have short attention spans. Munchkins may be brave in the face of awful odds, but they are even braver when beating up crippled goblins for their lunch money. If a Munchkin seems to show mercy, it's because he was bored or distracted. After all, even stomping an ant helps you level up.

Welcome to the world of Munchkin. It’s a laugh a minute, pal.

Thomas Siddell is English, and resides in Birmingham. He has a day job as an animator for a video game company, and he rides the bus to work every day. He hates Boxbot. He really, REALLY hates Boxbot.
Loading...
or support indie stores by buying on
(This book is on backorder)