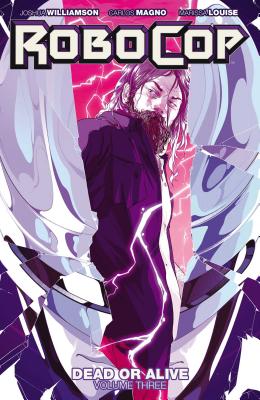 RoboCop and Anne Lewis must defend OCP and the Detroit police department from the ultimate uprising led by Killian and the people of Detroit. Serve the public trust. Protect the innocent. Uphold the law. Killian's endgame is set into motion. As the people of Old Detroit rally behind Killian's rebellion, RoboCop, Detective Anne Lewis, and the Police Department must prepare for the end of law and order. With OCP watching from their high towers, they will soon be brought to their knees as the Old Man's greatest secret is held hostage. Three worlds will collide and all comes to a head in this final chapter. Writer Joshua Williamson (The Flash; Nailbiter) teams up with co-writer Dennis Culver (E Is For Extinction) and artists Alejandro Aragon (28 Days Later) and Amancay Nahuelpan (Clive Barker's Hellraiser: Bestiary) for the conclusion of the critically acclaimed series.