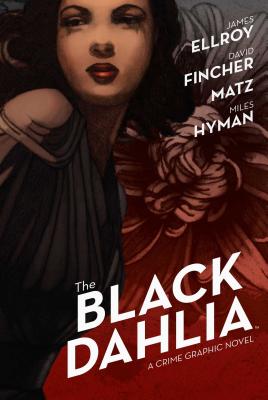 LAPD investigators Bucky Bleichart and Lee Blanchard find themselves enthralled with the mysterious and brutal murder of a beautiful young woman, Elizabeth Short. Their obsession takes a dark turn as they delve into the underbelly of Hollywood and the heart of the dead woman’s tortured and twisted past. It is a case that will test their mettle and their sanity.

This gripping graphic novel adaptation of the bestselling novel by James Ellroy, The Black Dahlia, delves deeply into one of the most haunting unsolved crimes in American history. Acclaimed storyteller Matz (The Killer) and award-winning filmmaker David Fincher (Gone Girl, Zodiac) worked at length to preserve much of Ellroy's original dialogue while bringing the stark images of 1940s LA to full, living color with illustrator Miles Hyman.

James Ellroy was born in Los Angeles in 1948. He is the author of the acclaimed L.A. Qurtet - The Black Dahlia, The Big Nowhere, LA Confidential and White Jazz, as well as the Underworld USA trilogy: American Tabloid, The Cold Six Thousand and Blood's a Rover. He is the author of one work of non-fiction, The Hilliker Curse: My Pursuit of Women. Ellroy lives in Los Angeles.

In 1998 MATZ’s hit series, THE KILLER, with artist Luc Jacamon, made its comic book debut. It became a bestseller that found its way onto the shelves of bookstores in many countries, all the way to the USA with Archaia. It was then optioned by Paramount for a movie that might be directed by David Fincher. MATZ has also created a new line of comic books, Rivages/Casterman/Noir, which are adaptations of noir novels. But my MATZ’s day job for the last 15 years has been to write for the videogame industry, as he has been an employee at Ubisoft for all these years. Now in charge of the writing department, MATZ has been involved with games such as “Splinter Cell,” “Ghost Recon,” “Rainbow Six,” “Prince of Persia,” and the “Assassin’s Creed” series.
Loading...
or support indie stores by buying on