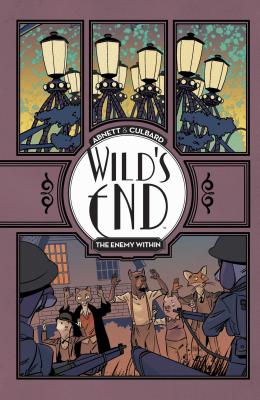 The invasion of Earth was just the beginning for this unlikely team of heroes. As Clive, Susan, Fawkes, and the other survivors of the alien invasion of Lower Crowchurch try to cope with what just happened to their small town, the military arrives in an attempt to cover up the "incident." Town residents are immediately detained, questioned, and treated with suspicion. Are they alien spies, collaborators, sympathizers? Clive and the rest will need to escape imprisonment if they're to get the word out and warn the rest of the world in case the aliens return.

Dan Abnett is a novelsit and award-winnig comic book writer. He has written twenty-five novels for the Black Library, including the acclaimed Gaunt's Ghosts series and the Eisenhorn and Ravenor trilogies, and with Mike Lee, the Darkblade cycle. His Black Library novel Horus Rising and his Torchwood novel Border Princes (for the BBC) were both bestsellers. He lives and works in Maidstone, Kent. INJ Culbard is a cartoonist, inker, colorist, letterer, and British writer of comics
or
Not Currently Available for Direct Purchase
Copyright © 2020 American Booksellers Association