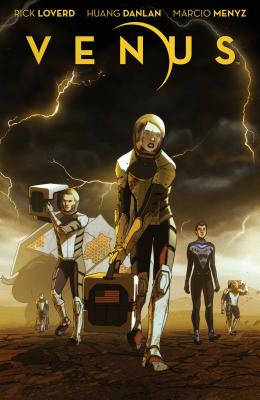 Experience the harsh and unforgiving landscape of Venus, where the only rule is simple: Adapt or die. In 2150, Earth's resources are depleted and countries race to outer space to mine what they need from other planets. China has laid claim to Mars, so the US and its allies have to make do with getting what it needs from the inhospitable world of Venus. But for a group of Americans making its way there, survival has become all too real. After their ship crash lands on the planet, the scrappy crew is forced to do whatever it takes to navigate the harsh landscape in their journey to find the science base they were flying toward. In the vein of great adventure survival stories like Lost and The Martian, there's only one reality on Venus--adapt or die.

Rick Loverd is the director of The Science & Entertainment Exchange, a program of the National Academy of Sciences. The program's mission is to connect scientists, engineers and doctors with Hollywood writers, producers, directors and actors with the view of helping to ensure accurate portrayal of science in film, on television and in other entertainment outlets. Launched in November 2008, the Exchange has helped filmmakers on about 700 films and television programs, including Iron Man 2, Thor, Tron: Legacy, The Avengers, Star Trek: Into the Darkness, Lost, Fringe, Green Lantern, Castle, Bourne: Legacy, The Good Wife and Captain America: The Winter Soldier.
or
Not Currently Available for Direct Purchase