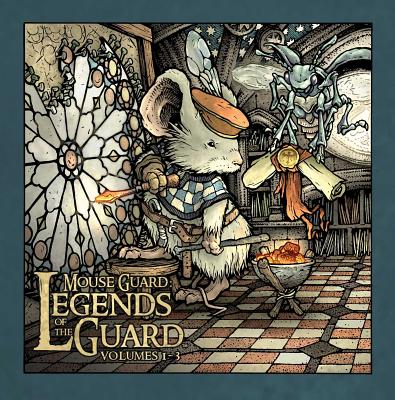 Legends of the Guard Box Set

The legends of Mouse Guard collected in one collectible box set.

Inside the June Alley Inn, located in the Western mouse city of Barkstone, mice from all over the territories gather for food, drink, and stories. A storytelling competition, a tradition of the establishment, takes place with each mouse telling fantastic tales of courage and cunning, with the hope of being selected winner and having their bar tab cleared by night's end. This box set includes all three volumes of the New York Times bestselling and Eisner Award-winning series, Mouse Guard: Legends of the Guard and features tales written and illustrated by a collection of award-winning and critically acclaimed storytellers personally selected by series creator David Petersen. Featuring stories by Skottie Young, Mark Buckingham, Bill Willingham, Stan Sakai, Terry Moore, Becky Cloonan, Karl Kerschl, Ramón K. Pérez, and more!

David Petersen was born in 1977. His artistic career soon followed. A steady diet of cartoons, comics and tree climbing fed his imagination and is what still inspires his work today. He is a three time Eisner Award winner for his work on his Mouse Guard series. David received his BFA in Printmaking from Eastern Michigan University where he met his wife Julia. They continue to reside in Michigan with their dogs Autumn and Bronwyn
or
Not Currently Available for Direct Purchase
Copyright © 2020 American Booksellers Association