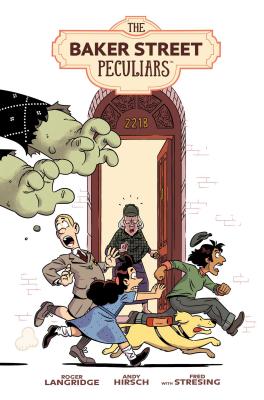 The Baker Street Peculiars is a supernatural twist on the beloved world of Sherlock Holmes.

When a giant lion statue in Trafalgar Square comes to life and wreaks havoc on 1930s London, it seems like the perfect case for the world’s most famous detective, Sherlock Holmes. With an overwhelmed caseload, however, Holmes recruits the help of three precocious young detectives-in-training (and one cunning golden retriever) to solve the mystery. Molly, Rajani, Humphrey, and Wellington (the dog) will have to work together and use all their wits if they are to uncover the truth behind the living statues and save London. But on the legendary Baker Street, nothing is as it seems and their biggest mystery might be the real identity of the famous detective who brought them together.

Written by Eisner Award winner Roger Langridge (Thor: The Mighty Avenger, Abigail and the Snowman) and illustrated by Andy Hirsch (Adventure Time, Regular Show), The Baker Street Peculiars is a heartfelt and supernatural twist on the beloved world of Sherlock Holmes.

Roger Langridge has been producing comics for over twenty years. Most recently, he has attracted critical attention for his work on the Harvey Award-winning THE MUPPET SHOW COMIC BOOK (BOOM! Studios) and THOR: THE MIGHTY AVENGER (Marvel Comics); other works of note include Marvel's FIN FANG FOUR, Fantagraphics' ZOOT! and ART D'ECCO (in collaboration with his brother Andrew), and the NCS, Ignatz, Eisner and Harvey Award-nominated comic book FRED THE CLOWN. He currently lives in London with his wife Sylvie and their two children.
or support indie stores by buying on