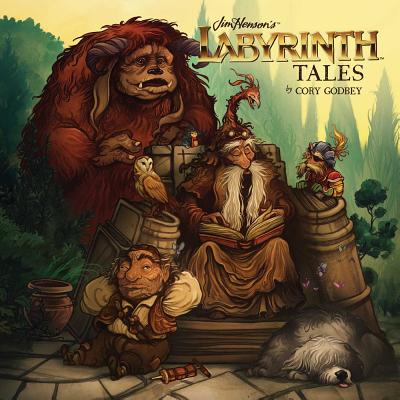 “What a flabbergastingly delightful series of events! Where ever to begin?”

Experience the endlessly imaginative world of Jim Henson’s Labyrinth through the eyes of its most fantastical and beloved characters! Witness a day in the life of Sir Didymus, the recklessly heroic fox-terrier; Ludo, the lovable oaf; Hoggle, an ever loyal companion; and others as they play games, work together, and revel in the magic of the labyrinth.

“Cory Godbey adventures into the visual wonderland of Jim Henson’s Labyrinth and perfectly captures its eclectic cast of curious characters. There’s a magic dance of line and color within these pages!”
— --Tony DiTerlizzi, New York Times Bestselling creator of The Spiderwick Chronicles

James Maury "Jim" Henson was an American puppeteer, artist, cartoonist, imagineer, inventor, screenwriter, film director and producer, best known as the creator of The Muppets. As a puppeteer, Henson performed in various television programs, such as Sesame Streetand The Muppet Show, films such as The Muppet Movie and The Great Muppet Caper, and created advanced puppets for projects likeFraggle Rock, The Dark Crystal, and Labyrinth. He was also an Academy Award-nominated film director (for his short film Time Piece), Emmy Award-winning television producer, and the founder of The Jim Henson Company, the Jim Henson Foundation, and Jim Henson's Creature Shop.
Loading...
or
Not Currently Available for Direct Purchase