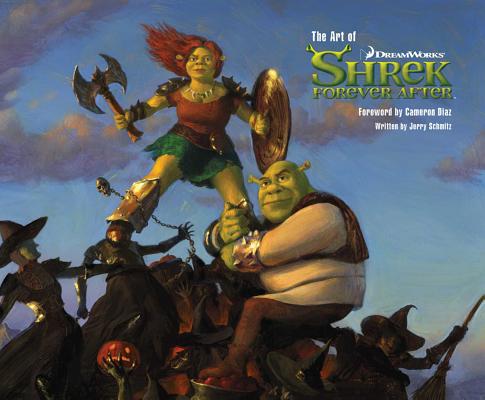 The Art of Shrek Forever After

For Shrek, life is good. He’s king of the fairytale kingdom of Far Far Away, surrounded by friends, and a celebrity to his people. But boredom takes hold . . . that is, until he meets the smooth-talking Rumpelstiltskin and a wish turns his world inside-out. In Shrek Forever After, the latest installment in the blockbuster series from DreamWorks Animation, Shrek’s desire to feel like a “real ogre” leads him to relive his famous adventures, but in a world where ogres are hunted, Rumpelstiltskin is king, and Princess Fiona has never even heard his name! Readers can join Donkey, Fiona, Farqhuad, and their favorite ogre for the behind-the-scenes story of his latest adventure, the first three Shrek films, and how the land of Far Far Away came to be.

Jerry Schmitz is an independent marketing consultant and publicist whose list of clients include award-winning filmmakers, actors, and production companies. Prior to that, he spent nearly fifteen in the studio system as a marketing/publicity executive and production liaison at Amblin Entertainment, DreamWorks SGK, and Sony Pictures Animation/Sony Imageworks. The many books he has contributed to include The Making of Jurrasic Park: The Lost World, Men in Black: Behind the Scenes, The Art and Making of Monster House, and The Art of Open Season. He ghost authored Surf’s Up: A True Story for penguin surf icon Cody Maverick (Did you really think an animated character wrote the book?). He lives in Los Angeles.
Loading...
or
Not Currently Available for Direct Purchase