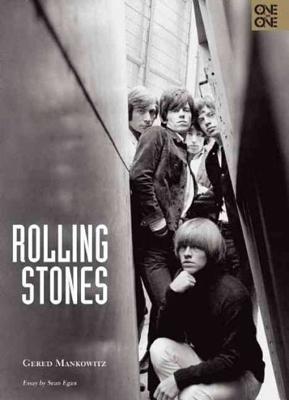 Rolling Stones (One on One) (Paperback)

In September of 1965, nineteen-year-old photographer Gered Mankowitz received a phone call asking if he wanted to accompany the Rolling Stones on their American tour the next month. The assignment: Photograph everything the up-and-coming Stones did in America to feed to the British press. Overwhelmed, Mankowitz naturally said yes. From the start, which began with a flight out of Heathrow to New York’s John F. Kennedy Airport in the Royal Ambassador Class section of a trendy TWA jet, Mankowitz was made to feel like one of the boys and invited to participate in the band’s true rock ’n’ roll lifestyle. Once they reached New York, the Stones began traveling with opening acts Patti LaBelle and the Bluebells, the Rocking Ramrods, and the Vibrations, making their way across Canada and the U.S. to their final stop in Los Angeles on December 5, 1965. Mankowitz continued photographing the Stones throughout ’66 and ’67 in the U.K. and abroad, documenting their ongoing success and shooting a few album covers for the band, including the seminal December’s Children and Between the Buttons. This is an astounding, candid collection of photographs of the Rolling Stones and their rise to international fame.

Gered Mankowitz is an accomplished photographer best known for his portraiture of rock musicians. His portfolio includes sessions with the Rolling Stones, Jimi Hendrix, Elton John, and George Harrison, among others. He lives in Cornwall in the United Kingdom.
or
Not Currently Available for Direct Purchase
Copyright © 2020 American Booksellers Association