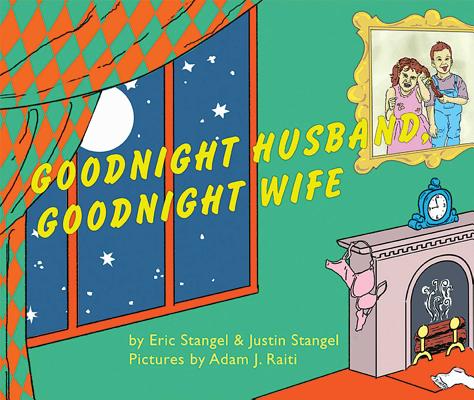 In the green suburbs, tucked away in bed, are two parents. “Goodnight husband, goodnight wife.” And to all the familiar things in the rumpled bedroom—to the portrait of two rowdy kids, to the dog peeing on the rug, to the wrinkle cream and bloodpressure medication, to each and every dirty sock—the husband and wife say goodnight. In this humorous parody of a children’s literature classic, familiar to generations of married couples, the gentle sarcasm and clever illustrations combine to make a perfect book for the end of every frustrating, exhausting, utterly priceless day.

Brothers Eric Stangel and Justin Stangel are head writers and producers of the Late Show with David Letterman, part of a team that has won two Primetime Emmy Awards, twenty-one Emmy nominations, and various Writers Guild of America nominations. In 2011, Eric Stangel was named to Time.com’s Twitter 140, a list of the world’s most influential Tweeters. They live in New York.
Loading...
or
Not Currently Available for Direct Purchase