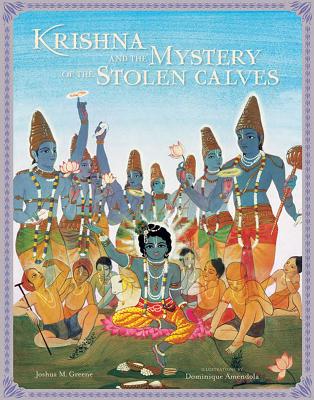 Krishna and the Mystery of the Stolen Calves

When powerful god Brahma tries to outsmart the village children of Vrindavan, he learns a lesson he won’t soon forget: there is magic in friendship. From the ancient texts of India called the Puranas comes this universal tale of childhood bonds. The Puranas contain hundreds of stories, many dedicated to Krishna, honored by Hindus worldwide as divinity in personal form. Whether one views Krishna as a transcendent figure or a magical cowherd boy, his stories captivate young readers. His love of nature and his dedication to family and friends have made him a hero for all ages.

Praise For Krishna and the Mystery of the Stolen Calves…

"One day, Krishna and his friends were tending their calves by the Yamuna River. 'Here is a nice spot,' he said. 'The calves can drink from the river while we eat our lunch.' The children sat on the ground and opened their baskets."
— from the book

Joshua M. Greene has produced films for PBS and Disney, has served as vice president for New York’s largest PR firm, and was appointed director of strategic planning for the United Nations Peace Summit of Religious and Spiritual Leaders. He was also an adjunct professor at Hofstra University in New York. His previous works include the best-selling Here Comes the Sun: The Spiritual and Musical Journey of George Harrison; Justice at Dachau: The Trials of an American Prosecutor;Witness: Voices from the Holocaust; and Gita Wisdom: An Introduction to India’s Essential Yoga Text. In 1970, he was initiated as Yogesvara Das by Bhakivedanta Swami Prabhupada and served for thirteen years in Prabhupada’s society as director of French-language publications.

Dominique Amendola was born in France and lives in Vrindavan, one of India’s most sacred pilgrimage sites. She has illustrated devotional subjects from Sanskrit texts for more than thirty years.
Loading...
or
Not Currently Available for Direct Purchase