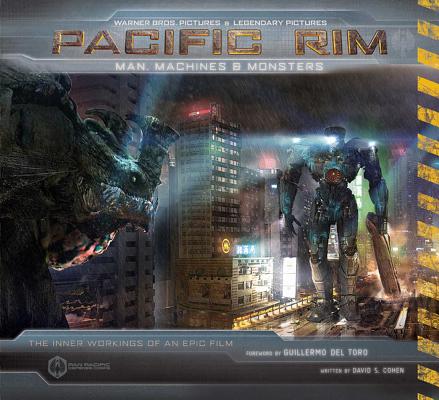 From acclaimed filmmaker Guillermo del Toro comes Warner Bros. Pictures' and Legendary Pictures' epic sci-fi action adventure Pacific Rim. When legions of monstrous creatures, known as Kaiju, started rising from the sea, a war began that would take millions of lives and consume humanity's resources for years. To combat the giant Kaiju, a special weapon was devised: massive robots, called Jaegers, which are piloted by an international crew of soldiers in the Pan Pacific Defense Corps. But even the Jaegers are proving nearly defenseless in the face of the relentless Kaiju. On the verge of defeat, two unlikely heroes—a washed up former pilot and an untested trainee—team up to pilot a legendary but seemingly obsolete Jaeger on a mission to halt the mounting apocalypse. Pacific Rim: Man, Machines & Monsters chronicles the production of the film with stunning concept art, captivating photography, and cast and crew descriptions of the shoot.

David S. Cohen has covered show business for 15 years, including more than a decade writing about visual effects for the entertainment bible, Variety. He is the longtime writer of Script Magazine's popular "From Script to Screen" series, and his previous book, Screen Plays, is a collection of those articles about the vicissitudes of Hollywood script development. He lives in Los Angeles.
Loading...
or
Not Currently Available for Direct Purchase