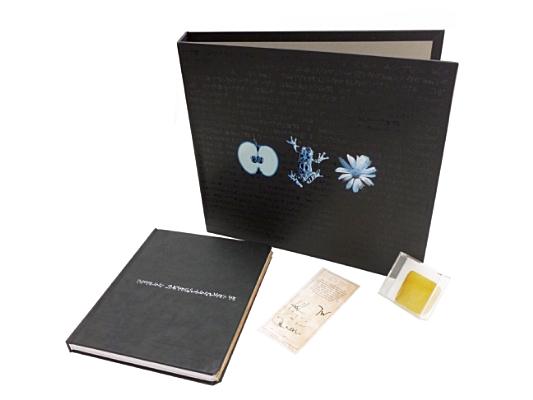 This product description has been updated by the publisher effective August 6, 2013. This collectors set features a special edition of "Fringe: September's Notebook" bound in sleek black leatheras seen in one of the final episodes of the show, in the hands of the title character The book is housed in a deluxe clamshell case, with a numbered plate with replica signatures by showrunners and cast. Also included are exclusive ephemera, including two additional posters and a complete reproduction of the comic book seen in Season 5, with awesome illustrations inspired by the show's "Fringe Division." ONLY 1,267 CREATED.
Copyright (c) 2013 Warner Bros. Entertainment Inc. FRINGE and all related characters and elements are trademarks of and (c) Warner Bros. Entertainment Inc.

Tara Bennett is the author of "300: The Art of the Film" and official companions to television s "LOST" and "24." She writes for popular outlets, including "SFX, Sci Fi" magazine, and Movies.com, and is an adjunct professor of film and television at Rowan University in New Jersey.

Paul Terry coauthored (with Tara Bennett) the "LOST Encyclopedia" and was the editor of Bad Robot/ABC s official magazines for "LOST" and "Alias." Terry is also a songwriter/composer whose film scores include the award-winning werewolf comedy "he Furred Man." He lives in London.

Jeff Pinkner (Executive Producer, "Fringe") grew up in the suburbs of Baltimore, Maryland. He attended Northwestern University and Harvard Law School. Pinkner began his television-writing career with a freelance episode of "The Practice." He has written and produced several series, including "Profiler, Early Edition," and "The Street." Pinkner served as a writer and producer on all five seasons of "Alias" and served as showrunner in its final season. He then served as executive producer on "Lost" and "October Road." He lives in Los Angeles.