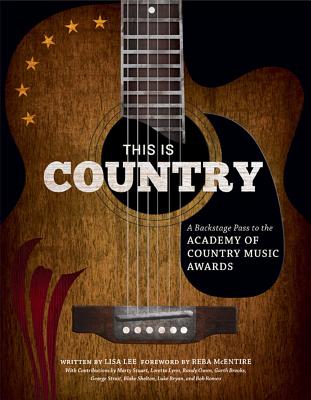 A Backstage Pass to the Academy of Country Music Awards

A celebration of five decades of country music magic with all the stars and legendary entertainers who brought the beloved Academy of Country Music Awards to life, pubbing in anticipation of the 50th anniversary show.

From the first informal awards ceremony at the Hollywood Palladium in 1966 to today’s star-studded show on CBS, generations of country’s biggest superstars have graced the Academy of Country Music Awards stage. Now, for the first time ever, the ACM is opening its archive to reveal candid, never-before-seen photographs and memorabilia capturing some of the greatest moments in the history of country music. Rich with backstage and performance photographs, compelling behind-the-scenes stories, and firsthand accounts from country legends and contemporary artists, This Is Country: A Backstage Pass to the Academy of Country Music Awards offers a rare and intimate glimpse into the history, trends, and evolutions of the genre. With contributions by Reba McEntire, Loretta Lynn, George Strait, Garth Brooks, Alabama’s Randy Owen, Blake Shelton, Luke Bryan, Marty Stuart, and many more, this book is a trove of history and celebrity, and a must-have for fans of country music.

Based in Los Angeles after a decade of living in Nashville, Lisa Lee has been covering country music for more than twenty years. She has written, produced, and corresponded for CMT/MTV Networks and The Nashville Network. Her credits include CMT Insider and TV news specials Sex in Videos: Where’s the Line?, Controversy: Tammy Wynette, and Prism Award–winner Addicted to Addiction. A graduate of Northwestern University’s Medill School of Journalism, Lee is currently editor of the Academy’s magazine, ACM Tempo, and manages the ACM video and photo archives, creative direction, and content production. She lives in Los Angeles.

One of the most successful female recording artists in history, Reba McEntire has sold over 56 million albums worldwide. A member of the Country Music Hall of Fame and Hollywood Bowl Hall of Fame, she has won 15 American Music Awards, 13 ACM Awards, nine People’s Choice Awards, seven CMA Awards, and two Grammy Awards. Billboard, Country Aircheck, and Mediabase recognized her as the biggest female hitmaker in country music history with 64 top ten hits and 35 number one hits. She is also an acclaimed actress, having starred in 11 movies, two sitcoms, and the Broadway classic Annie Get Your Gun. She has hosted the Academy of Country Music Awards a record 14 times. She lives in Los Angeles.
Loading...
or
Not Currently Available for Direct Purchase