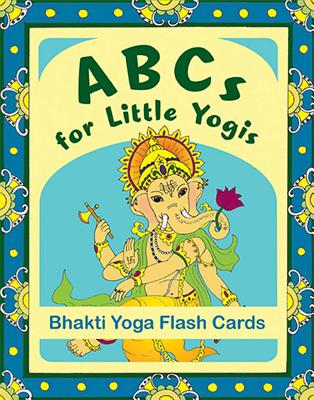 Perfect for play and display, ABCs for Little Yogis flash cards feature colorful illustrations and educational verses that make it fun and exciting for children to learn the alphabet while celebrating bhakti yoga traditions.

Filled with colorful illustrations of key Hindu gods, goddesses, and traditions, ABCs for Little Yogis helps children learn important bhakti yoga wisdom—and their ABCs—in no time. Each card is made of high-quality laminated cardstock making the deck durable enough for children to play with, while the large size and beautiful images allow for vibrant display. Also included is a booklet full of games and exercises that will help you and your children make the most out of these flash cards. Whether the goal is recognizing each letter, memorizing the order of the alphabet, or learning more about bhakti yoga, ABCs for Little Yogis holds the potential for hours of educational fun.

Lauren Nonino lives in Colorado, where she is an elementary school drama and dance teacher. She is also a wife and mother of two children, son Rama and daughter Radha. In her spare time, she enjoys gardening, hiking, biking, and swimming in the great outdoors, as well as practicing yoga.

Sarah Meade was raised in the bhakti yoga tradition and remembers drawing the Hindu gods and goddesses from a young age. She divides her time traveling throughout the United States, France, and India with her husband and son.
or
Not Currently Available for Direct Purchase
Copyright © 2020 American Booksellers Association