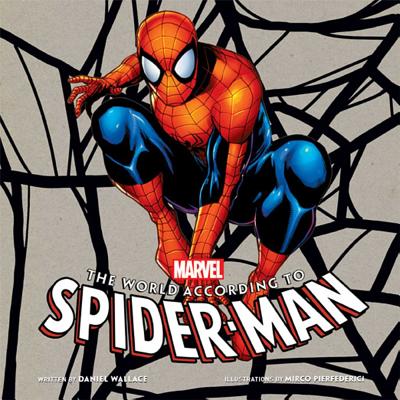 The World According to Spider-Man (Hardcover)

Get to know the real Spider-Man through this hugely fun and interactive journey into the webbed wonder’s amazing world.

It’s not easy being a Super Hero when you’ve got a steady job to hold down and girlfriend problems to deal with. Somehow, Peter Parker (aka Spider-Man) manages to do it while regularly saving New York City from a rogues’ gallery of super villains. In The World According to Spider-Man, the wisecracking hero spills the beans on how he balances his two lives and manages to keep his trademark sense of humor, even while he’s tangling with Doc Ock or the Green Goblin. The book comes with a wealth of incredible removable items, including clippings from the Daily Bugle, Peter Parker’s report card, J. Jonah Jameson’s business card, Spider-Man’s driver’s license, an exclusive Spider-Man poster, and much, much more.

Mirco Pierfederici began his career in the Italian comics business working as an inker and colorist before being hired by Marvel as a cover and interior artist. He now works exclusively for Marvel, drawing titles such as The Avengers, Wolverine, X-Men, and Marvel Zombies. He also illustrated a graphic novel adaptation of the original Tron movie. He lives in Senigallia, Italy.
or
Not Currently Available for Direct Purchase
Copyright © 2020 American Booksellers Association