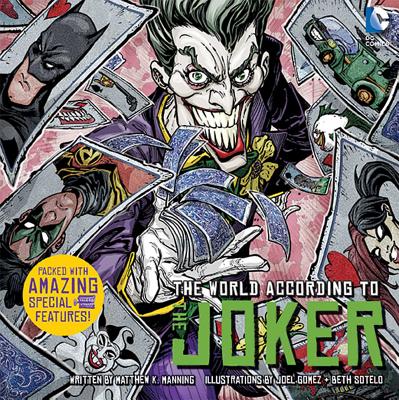 The World According to the Joker (Hardcover)

Get to know Gotham City's most feared villain in this absorbing exploration of the Joker's twisted world. Enter The Joker's twisted world as the Clown Prince of Crime divulges his deranged perspective in this psychotic expos Revealing his demented thoughts on a range of topics, including choosing the ideal henchmen, the best way to kidnap a Super Hero, and the art of the killer punch line, The World According to The Joker is a terrifying journey into the mind of the ultimate super-villain. Featuring a wealth of bonus features, including a flyer for The Joker's first stand-up gig, a Joker gas recipe, and the outrageously interactive "Wheel of Dead Robins," The World According to The Joker gives unparalleled insight into the unhinged world of the Harlequin of Hate. All related characters and elements are trademarks of and (c) DC Comics. TM & (c) Warner Bros. Entertainment Inc. (s14)

Matthew K. Manning is a comic book writer, historian, and fan. He has written many comics for Marvel and DC Comics, including Beware the Batman, Batman, The Batman Strikes!, Legion of Super-Heroes in the 31st Century, Spider-Man Unlimited, and Marvel Romance Redux. When not writing comics themselves, he writes books about the comic book medium and its rich history. He lives in Asheville, North Carolina, with his wife, Dorothy, and their two daughters, Lillian and Gwendolyn.
or
Not Currently Available for Direct Purchase
Copyright © 2020 American Booksellers Association