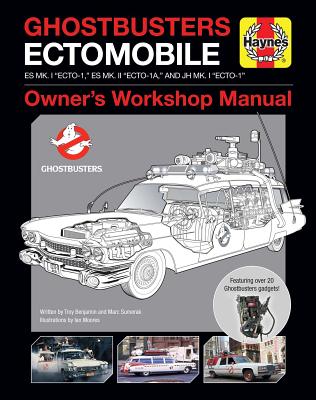 Go under the hood of the Ghostbusters’ iconic car and discover the secrets of the team’s ghoul-trapping gadgets with this comprehensive users manual for Ecto-1 and the equipment it carries.

Discover the secrets of the Ghostbusters’ iconic specter-smashing automobile, Ecto-1, with this comprehensive owner’s workshop manual. Along with a detailed breakdown of Ecto-1’s capabilities and exclusive cutaway images that show the car’s souped-up engine and onboard ghost-tracking equipment, the book also focuses on the Ghostbusters’ portable tools of the trade, including proton packs, ghost traps, and PKE meters. The book also looks at various models of Ecto-1, including the Ecto-1A from Ghostbusters II and the version of Ecto-1 seen in 2016’s Ghostbusters: Answer the Call. Featuring commentary from familiar characters, including Ray Stantz, Peter Venkman, and Jillian Holtzmann, Ghostbusters: Ectomobile: Owner’s Workshop Manual is the ultimate guide to the Ghostbusters’ legendary vehicles and the ghost-catching equipment the cars haul from one job to the next.

Troy Benjamin is a Los Angeles–based author who has written exhaustive fan guides, including the Marvel’s Agents of S.H.I.E.L.D. Declassified book series and was a co-writer of the official Guidebook to the Marvel Cinematic Universe. He’s also written and produced several Ghostbusters-based projects over the years, including fansites, podcasts, and more.

Ian Moores is an award-winning artist with over thirty years’ experience in illustration, design, and information graphics. His work has appeared in numerous books, magazines, and newspapers, including The Sunday Times, and graces the covers and pages of a diverse range of Haynes Manuals. He lives close to England’s most haunted village, Pluckley in Kent.

Marc Sumerak is an Eisner and Harvey Award-nominated writer and editor whose work over the past two decades has been featured in comics, books, and video games showcasing some of pop culture’s most beloved franchises, including Marvel, Star Wars, Harry Potter, Firefly, Ghostbusters, Back to the Future, and many more. Find out more at www.sumerak.com.
or
Buy Here
(This book is on backorder)
Copyright © 2020 American Booksellers Association