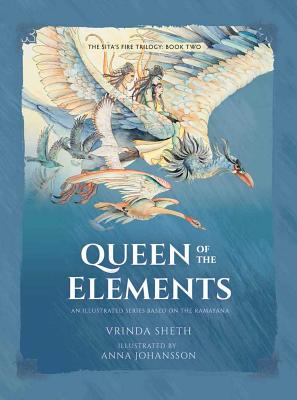 Queen of the Elements

An Illustrated Series Based on the Ramayana (Sita's Fire Trilogy #2)

Set in a world of kings and queens, celestial battles, invisible foes, and family rivalries, this epic tale forges legends in the fires of betrayal and prophecy.

In this one-of-a-kind trilogy based on the Ramayana, the darkness in the kingdom of Ayodhya continues to spread as Rama, rightful heir and favored son of King Dasharatha, is cast out of the city after an unthinkable betrayal. Facing a fourteen-year exile, Rama—accompanied by wife Sita and brother Lakshmana—embarks upon a journey that will spark a legend.

While struggling to survive in the mythical forests of ancient India, the trio encounters divine sages, unexpected allies, and an array of blood-drinking demons hell-bent on revenge. Throughout these ordeals, Sita discovers the true extent of her unique powers, Lakshmana battles with his own internal demons, and Rama struggles to make peace with his destiny in a kingdom on the verge of collapse.

Alternately told through the perspectives of Sita, Rama, and Lakshmana, Queen of the Elements reveals an entirely new side to this classic saga.

ANNA JOHANSSON is a self-taught watercolor artist from Sweden. Her artwork is inspired by the mystical yoga tradition of ancient India. Her previous work includes The Peaceable Forest. She lives in Florida with her husband. When she is not creating art, s
Loading...
or
Not Currently Available for Direct Purchase